Last week Zenit KAZAN downed Italy’s vice champions Copra Elior PIACENZA in straight sets in the first round of the Playoffs 6 and the players from Tatarstan are now only one step away from making the Final Four Tournament of the 2014 CEV DenizBank Volleyball Champions League – Men. 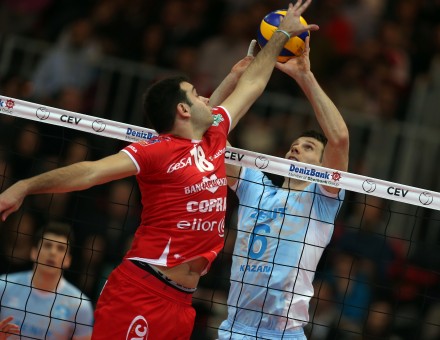 However, head coach Vladimir Alekno wants his guys to keep their feet on the ground since the “Wolves” – as the players of PIACENZA are dubbed – already stormed back from a straight defeat in the Playoffs 12 to edge past their countrymen of Lube Banca Marche MACERATA at the golden set.

“I liked the way we played in Italy” says Zenit wing-spiker Evgeny Sivozhelez. “We definitely performed better than the Italians in serving and reception, so this is how we stroke that victory. However, we shall not underestimate our opponents. PIACENZA has got experienced players and also some fresh blood” he continues. “I really like their setter, Luciano De Cecco. We do understand that everything will be decided here in Kazan and that this second game is vital.”

The team captain of Copra Elior, 37-year old Hristo Zlatanov, missed the home match due to injury and was out also last Sunday as PIACENZA beat Sir Safety PERUGIA 3:1 to cement their second place in the standing of the national league. Cuban-born middle-blocker Robertlandy Simon anchored his side with a series of terrific attacks on that night.

“Simon is a terrific weapon that PIACENZA can rely on” says Zenit middle-blocker Alexander Abrosimov. “He is a very atypical middle-blocker, because he does not jump vertically, but in many different directions, so this way he can avoid the block. We will carefully analyse his performance and try to stop him so that he won’t be that effective here in Kazan.”

RUS M: Did they renounce him too...