Russia put on a strong performance with a straight-sets (25-19, 25-18, 25-16) victory over Thailand on the first day of action in the FIVB Women's World Olympic Qualifying Tournament in Tokyo, Japan on Saturday. 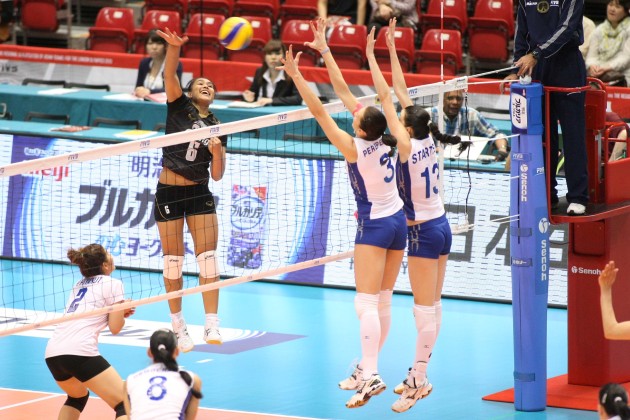 Russia dominated the game at the net with a 13-2 margin in blocks and edged the opposition 3-2 in aces. Both teams made 15 errors and Russia held a 44-34 advantage in attacks.

Nataliya Goncharova proved to be Russia‘s spark with a match-high 14 points. Ekaterina Gamova and Maria Perepelkina each contributed 12 points while Maria Borisenko and Evgenia Estes added 10 apiece in the balanced offense. Kanthong Malika and Apinyapong Wilavan had 10 each for Thailand in the loss.

Thailand gave a spirited effort, but failed to deal with formidable size and power of the four-time Olympic champions.

A block by Gamova saw Russia take an early lead and despite a timeout, Thailand went into the First Technical Timeout behind. Borisenko delivered another spike following the TTO but Thailand slightly narrowed the gap to six points at 15-9. Nataliya Goncharova then soared for a spike to put Russia up 16-9 at the second TTO. Russia took a 10-point lead at 19-9 on a block before Gamova missed a spike, forcing them to take a time-out. Thinkaow Pleumjit‘s service pulled the Thais to within five again at 21-16 and Gamova sailed another spike wide for 22-17. However that was as close as the Asian side would come as Russia took the opening set.

The second started more evenly before Russia stormed ahead to take an 11-7 advantage. Thailand moved within three at 15-12 but Russia extended the gap to 21-16. Maria Perepelkina’s spike moved Russia within three of the set at 22-17. Gamova‘s block on a Thai spike failed making it 23-18 but she followed with a spike to give Russia set point and added a serve that Thailand could not handle to make it 2-0.

Russia took an early lead in the third set but were constantly pulled back by Thailand. A reception mistake by Kanthong gave Russia a 13-10 margin before a service error by Goncharova put the count at 15-11 as the world champions looked to extend their advantage. Thailand sent a serve long and Russia was up 16-11 at the second TTO. Apinyapong‘s spike made it 16-12 before Gamova missed on a dink and Russia led 17-13. A Gamova spike went long to make the score 18-14 but Perepelkina made a nice block for 20-15 as Russia moved to close out the match. Thailand called a final timeout while trailing 22-15 before another Goncharova spike made it 23-16 and Russia completed the victory on a one last spike by Goncharova.