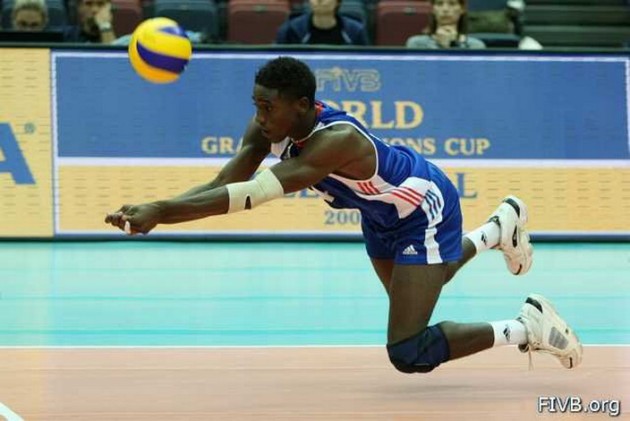 Cuba was led in scoring by their young captain Wilfredo Leon with 24 points, including three aces. His team blocked well on the day, with 16 blocks in total, led by Jorber Quintana Guerra with five. Russia was led by Pavel Moroz with 18. Russia’s coach Busato gave almost his whole team playing time, but they failed to find their rhythm.

Alexey Rodichev was attacking well for Russia early on, but Cuba countered him with the always aggressive Hernandez firing away on the wing. When Two consecutive blocks from Pavel Kruglov on Leon out wide saw Russia take a 21-18 advantage. Kruglov subsequently finished a close first set with his sixth score, a blistering spike to the corner.

Henry Bell Cisnero started the second well for Cuba, driving two attacks home to help his team move ahead 8-4. That advantage would be enough for Cuba with Leon constantly ebbing them ahead with six points in the set, including an hard ace to give his side set point, 24-17. Yoandry Díaz Carmenate then pitched in his third block to close a surprisingly easy set, evening the match at a set a piece.

In the third it was Bell again who stepped up with two spikes and a block to help Cuba ahead 7-4, but Russia’s Alexander Abrosimov drew his team even at 8-8 with an ace. Leon got going mid-set with three hard attacks during a Cuba run that put them in the lead 16-11. Cuba’s Quintana eventually clinched the set with two great scores at the net to close 25-20, including his fourth block.

Russia looked more lively in the fourth, with Yury Berezhko sparking a short run with an ace, on the way to a 15-11 lead. They continued this good form for the rest of the set, with Evgeny Sivozhelez attacking well on the way to 25-18, forcing a fifth set tie break.

A stunning block by Leon and an ace by Hernandez gave Cuba a 6-2 advantage in the fifth and a flurry of Russian errors didn’t help their cause, as Bell and Quintana delivered the finishing blows with ease.

Pool A will now move on to Santo Domingo, the Dominican Republic in two weeks time with the Caribbean island acting as hosts on behalf of Cuba due to renovations to their arena. The four sides will face off against each other once more after a close opening weekend.