Russia notched its second victory in as many outings with a straight sets (25-16, 25-23, 25-23) triumph over Korea on the second day of action in the FIVB Women's World Olympic Qualifying Tournament at Tokyo Metropolitan Gym on Sunday. 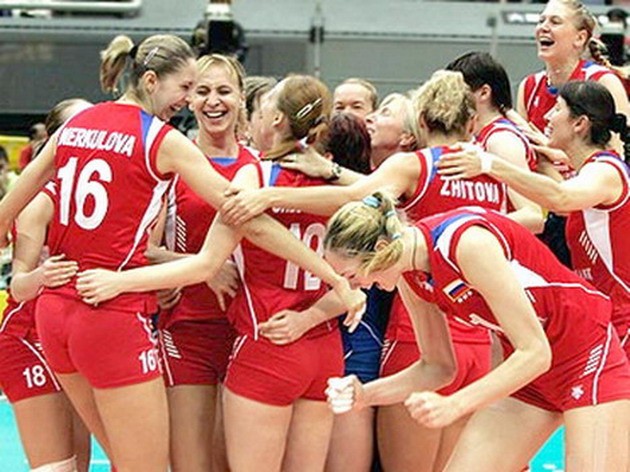 The Russians, who moved to 2-0 with the win, bested Korea (1-1) while exhibiting good blocking (10-5) and reception throughout the match. The Asian side made a strong run late in the second and third sets, but could not sustain it neither time.

Ekaterina Gamova had a match-high 16 points for Russia. Nataliya Goncharova added 13 and Evgenia Estes had 11. Kim Yeon-Koung and Hwang Youn-Joo paced Korea with 13 points each while Yang Hyo-Jin notched 10.

Russia’s Evgenia Estes spiked to put Russia ahead 5-3 in the opening set. A spike by Gamova gave Russia an 8-5 lead at the first TTO. Kim Yeon-Koung’s spike pulled Korea within a point at 9-8. An Estes spike put Russia up 12-9. Korea called a timeout after Russia scored another point. Hwang Youn-Joo’s missed spike made it 15-10 for Russia, which led 16-10 at the second TTO. Kim Yeon-Koung’s spike ended a long rally that saw Russia up 17-11. Estes soared for a spike to make it 20-11. Gamova‘s spike put Russia in front 22-12 as they closed in on the set. A service ace by Kim Hee-Jin took it to 23-15 and Russia took a timeout. Maria Perepelkina’s spike gave Russia the set 25-16.

After Kim Hee-Jin sent a spike long and Russia claimed a 5-2 lead in the second set, Korea took a timeout. A fine save by libero Kim Hae-Ran helped lead to a spike by Kim Yeon-Koung that made it 5-4. A missed spike by Nataliya Goncharova gave Korea an 8-7 lead at the first TTO. A service error by Hwang made it 12-9 for Russia, which reclaimed the momentum. After another Russian point, Korea called time down 13-9. Russia was in front 16-12 at the second TTO. Hwang rose for a spike to make it 18-14 and then followed with a service ace. Goncharova drilled a spike for 20-15 as Russia kept the pressure on. Korea scored five of the next six points to pull within 21-20. A net infraction stalled the rally and made it 22-20 for Russia. A spike by Kim Yeon-Koung and a service ace by Kim Hee-Jin tied it 22-22. Korea then moved in front when Gamova missed a spike. Russia ran off the last three points and took the set 25-23 on a missed spike by Kim Yeon-Koung.

Russia established a 5-3 lead in the final set after a missed spike by Kim Yeon-Koung. Korea scored three straight point to move ahead 6-5 and Russia called time. Kim Yeon-Koung’s spike sent Korea into the first TTO with an 8-6 advantage. Korea went up 12-10 after Gamova missed a spike. An Estes spike drew Russia within 13-12. Kim Yeon-Koung’s spike boosted Korea’s lead to 16-13 heading into the second TTO. A service ace by Kim Hee-Jin made it 18-14 as Korea gained steam. Yang Hyo-Jin’s spike made it 20-18 as Korea tried to hang on. A Korean spike sailed long and the score was 20-20. Back and forth it went down the stretch, with Russia pulling ahead 23-22 on a nice block. Gamova’s spike gave Russia match point at 24-23 and she closed it out 25-23 with a final blast.