World champions Russia racked up their fourth straight win with a straight sets (25-17, 25-16, 25-9) triumph over Peru on the fourth day of action in the FIVB Women's World Olympic Qualifying Tournament at Tokyo Metropolitan Gym on Wednesday. 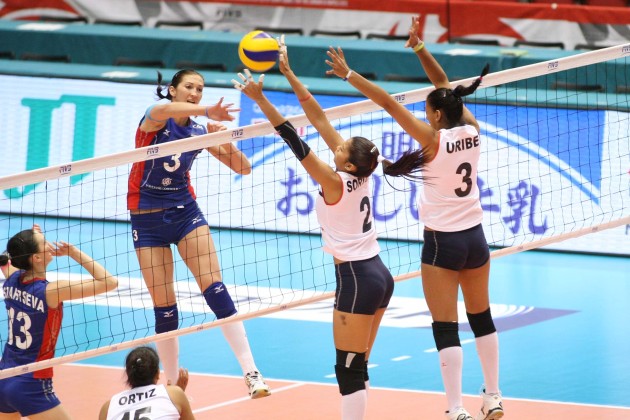 Russia held a huge 11-4 difference in blocks on their way to a 4-0 record, while Peru dropped to 1-3 with the defeat.The winners only made four unforced errors for the match against 26 by the defeated side.

The South Americans were overwhelmed by the powerful attack and defense of the Russians, who have yet to lose a set in the tournament. The match featured very few long rallies as Russia put on a clinical display in all facets of the game.

A spike by Evgenia Estes staked Russia to a 5-2 in the opening set. A block by Estes gave Russia an 8-3 lead at the first TTO. Estes placed a nice dink and Russia was up 10-4. Peru called a timeout while trailing 11-4. Daniela Uribe‘s spike made it 11-7 as Peru scored three straight points. When Peru closed to within 13-10 Russia called a timeout. A reception error by Daniela Uribe put Russia up 15-11 and Maria Perepelkina‘s block made it 16-11 at the second TTO. Estes pounded a spike to give Russia a 20-14 lead. Gamova split the Peru defense with a spike to make it 22-15 as Russia had the set within sight. Maria Borisenko‘s spike took Russia to set point at 24-17 and they closed it out 25-17 on a reception error by Peru.

A block by Gamova saw Russia grab a 5-1 lead in the second set. Russia continued to dominate and was in front 8-1 at the first TTO. A service ace by Daniela Uribe made it 10-4. Daniela Uribe hit a spike into the net to give Russia a 15-6 margin and a Gamova spike made it 16-6 at the second TTO. Russia went up 20-10 and Peru called a timeout to try and slow the charge. A spike by Karla Ortiz made it 20-13 and Russia took a timeout. Daniela Uribe‘s spike took the count to 22-14. Gamova‘s spike gave Russia set point at 24-16 and they claimed the set 25-16 on a nice block by Perepelkina.

Daniel Uribe sailed a serve long as Russia moved out to a 5-3 lead in the third set. A spike by Goncharova put Russia up 8-4 at the first TTO. Peru missed a spike, fell behind 10-4, and then took a timeout. A Borisenko spike made it 15-6 and Marina Akulova followed with one of her own to make it 16-4 at the second TTO. Alexandra Munoz struck a service ace to make it 17-7, but the outcome was not in doubt. Ginna Lopez missed a spike and the score was 20-7 for Russia. A reception error gave Russia match point at 24-9 and then ended it on a quick spike by Perepelkina.

Sports director of Dynamo Moscow – “Our...