Thailand rolled past Chinese Taipei in straight sets (25-16, 25-18, 25-20) on the fourth day of action in the FIVB Women's World Olympic Qualifying Tournament at Tokyo Metropolitan Gym on Wednesday. 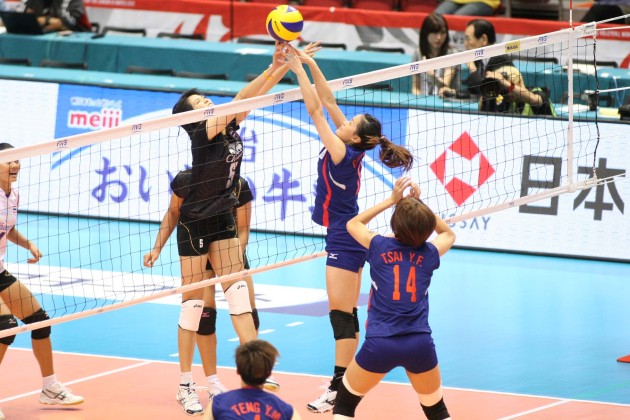 Thailand evened their record at 2-2 with the win, while Chinese Taipei fell to 0-4 with the loss. The Thais, who dominated in blocks (12-7) and aces (4-1), were proficient with both their attacks and receptions.

Thailand dominated the first two sets using power and good defense to achieve the victory, before Chinese Taipei put up a fight in the third.

Chinese Taipei’s Wen I Tzu served into the net to give Thailand a 5-2 in the first set.

A spike by Thinkaow put Thailand in front 8-5 at the first TTO. Sittirak’s spike made it 11-7 for Thailand. Wang Sin Ting‘s spike took the count to 14-10. A misplayed return gave Thailand a 16-10 lead at the second TTO. Thinkaow‘s spike ended a long rally and saw Thailand move ahead 18-12. A missed spike by Teng made it 21-12 for Thailand. Thinkaow‘s service ace put Thailand within two pints of the set at 23-14. Thailand took the set 25-16 when Teng sailed a serve long.

Thinkaow had eight points in the set, while Ten tallied four. Kanthong Malika‘s spike put Thailand up 5-4 in the second set. Tsai Yen Feng‘s serve was long and Thailand led 8-6 at the first TTO. A block by Kanthong made it 14-8 for the Thais. Thailand was on top 16-11 at the second TTO. A spike by Wang made it 18-13. Thailand took a timeout after a block by Tomkom Nootsara the their lead cut to 20-16. Kanthong hammered a spike for 23-16 as Thailand moved for the set. Chen ended a long rally with a powerful spike for 23-17. Thailand claimed the set 25-16 on a block by Apinyapong .

A spike by Wang Sin Tin gave Chinese Taipei a 5-2 lead in the third set. A block by Wen put Chinese Taipei in front 8-5 at the first TTO. Kanthong‘s spike made it 12-9 as Thailand tried to stay in contact. A service error by Thailand made it 15-10 and Chinese Taipei was up 16-11 after a block by Wang. Thinkaow‘s block pulled Thailand within 16-13 and Chinese Taipei called a timeout. Teng‘s spike ended an extended rally that featured a fantastic diving save by Apinyapong. Thailand equalized 17-17 on a spike by Kongyot Ajcharaporn. A missed spike by Tomkom put Thailand up 20-19 and a reception error made it 21-19. Thailand moved to finish the match by scoring five straight points to get to match point at 24-19. Kanthong‘s spike gave Thailand the victory 25-20.