Fans in Kazan saw a dramatic match between Zenit and Fakel Noviy Urengoy where the current Russian champions broke the resistance of Fakel in tie-break and took a revenge for the lost in the Cup from tonights opponent, four days ago 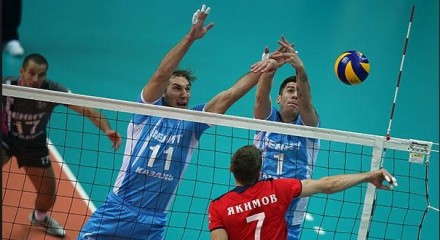 Every set was tough, but the fisrt one was more than the others, in which visitors showed a great game on the block (up to 8 for). As a result, Fakel took a starter – 34-32.

In the decisive set, in the tiebreaker, strength and luck gave up on amazing Igor Tyurin. He began to shoot at outer, while Maxim Mikhailov took over for Matthew Anderson and scored almost every ball he shot.

In three home league matches so far, Zenit produced 3 out of 9 possible points and now will go to the guest tour route Surgut – Serpukhov – Krasnodar.

Anderson scored 21 for Zenit and Tyurin 25 for Fakel.

PHOTO OF THE DAY: Volkov fulfilled his...