World Champions Russia qualified to the London Olympic Games by defeating Japan in straight sets (25-22, 25-20, 25-20) on the sixth day of action in the FIVB Women's World Olympic Qualifying Tournament at Tokyo Metropolitan Gym on Saturday. 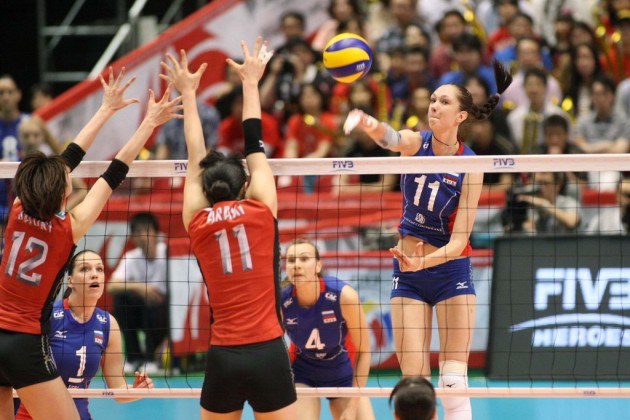 The victory kept the Russians unbeaten at 6-0, while Japan dropped to 4-2.

Russia‘s Ekaterina Gamova dominated in a match that pitted the teams with the best records in the tournament. Gamova led the winners with 25 points while Evgenia Estes and Iuliia Merkulova chipped in with nine points each. Yukiko Ebata and Saori Kimura topped Japan with 16 points apiece.

A night after scoring a dramatic five-set win over Cuba, Japan could not penetrate the big Russian defense and deal with their powerful spikes.

A block by Estes put Russia in front 5-2 in the first set. Borisenko’s spike put Russia up 7-4. A spike Lesya Makhno gave Russia an 8-5 lead at the first TTO. Kimura‘s two service aces pulled evened the game at 9-9. Gamova’s block ended a long rally and put Russia up 11-10. A service ace by Gamova spotted Russia to a four-point lead at 15-11 and Japan called a timeout. Kimura‘s spike made it 15-13. Russia led 16-13 at the first TTO after a Gamova spike. Kimura spiked to make it 18-14. A Kimura block cut Russia‘s lead to 19-16 and they called timeout. Luliia Merkulova‘s spike put Russia in front 20-16. A spike off a nice option play by Risa Shinnabe made it 21-18. Japan pulled within two at 21-19 but Gamova answered with a spike. Borisenko‘s block put Russia two points from the set at 23-20. Ebata‘s service ace landed just inside the line and Japan was just one point behind at 23-22. Gamova‘s spike made it set point at 24-22. Yamaguchi misplayed a spike attempt and Russia took the set 25-22.

Gamova‘s block staked Russia to a 5-2 lead in the second set. Another Gamova block made it 7-2 and a dink by Makhno gave Russia an 8-3 margin at the first TTO. Ebata‘s service ace cut the Russian lead to 9-7. Kimura blasted a spike and Japan was down by one at 10-9. Kanako Hirai’s block made it 14-12 as Japan kept the pressure on and Kimura followed with a service ace. Gamova‘s block took it to 15-13 and then Japan misplayed a reception and Russia was ahead 16-13 at the second TTO. Shinnabe‘s serve sailed long and Russia was up five at 20-15. Ebata unleashed consecutive service aces and again Japan pulled within two at 20-18. Kimura‘s spike made it 20-19. A Russian spike put them up 22-19 but Kimura replied with a spike. Erika Araki sent a serve long and Russia was eyeing the set at 23-20. Gamova‘s spike made it set point at 24-20 and a return by Estes clinched the set 25-20.

A service error by Japan gave Russia a 5-3 lead in the third set. An Araki spike made it 7-5 for Russia. Russia led 8-5 at the first TTO after a spike by Makhno. Hirai‘s block cut Russia‘s lead to one at 9-8 and they took a timeout. Merkulova‘s spike made it 10-8. Saori Sakoda soared for a spike and it was 11-10 for Russia. Borisenko‘s block made it 15-11 as Japan looked for an answer. Estes hammered a spike and it was 16-12 for Russia at the second TTO. Kimura’s spike culminated a long rally and Japan was back within one at 16-15. Again Gamova delivered a spike for 17-15. Merkulova made it 20-18 with a nice return and Gamova followed with another spike. It was clear that Japan was running out of time. Hirai‘s ace made it 21-20 as Japan tried to hang in. Once again, Gamova crushed a spike for 22-20. A block took it to 23-20 and Russia was two points from the match. Gamova‘s block took it to match point at 24-20 and Borisenko ended it 25-20 with a perfect dink.