All things suggest that two Russian giants will have domestic setters in the next season. 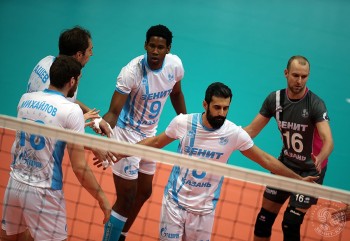 Zenit has already announced that Saeid Marouf will be a free agent at the end of the season, which clearly points out that the team from Kazan does not plan to extend the cooperation with the Iranian setter. The reason might be the limit of the foreign players. Zenit can use only two per each game in the Russian Championship, and the club has already picked Wilfredo Leon (under contract) and Matt Anderson (extended contract for the next season). So, it won’t be a surprise if head coach Vladimir Alekno decide to appoint Igor Kobzar to the role of a starting setter.

The similar situation is in Belogorie. Our sources tell that Dragan Travica will finish his episode in Belgorod at the end of the season, so head coach Gennadiy Shiipulin will have to look for another starting setter. If we take into consider that Georgy Grozer has a safe place in the squad, and that the club is doing everything to acquire Marko Ivović, then Belogorie obviously plans to give a chance to some domestic setter. Will that be Sergey Bagrey, Evgeny Rukavishnikov or someone else? We are about to see when the new season starts.

POL W: Skowronska-Dolata – “I promised that I would help the national team, but…”

And where will Travica go now? Back to Italy? And where? Trento???

Pankov ?? He is my favorite young setter