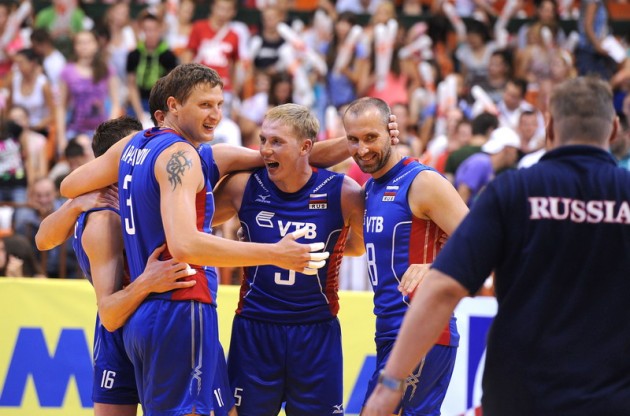 Russia started the match with great determination, and by the first technical time-out they had a four point lead thanks to couple of monstrous serves by Mikhaylov and an excellent 1-on-1 block by Apalikov. The Russian lead grew to six points and the hosts couldn’t get any closer.

The second set was far more interesting as Serbia managed to find their rhythm and stay on top of Russia by couple of points. Russia managed to equalize and take the lead, but Serbia was on the right track all the way, full of confidence, and by the second technical time-out it was 16-12 for the hosts. The Serbs expanded the advantage and despite a late rally, Russia could not catch up.

The third set was similar to the previous one until the second technical time-out. Serbia was leading by couple of points and at the second mandatory break the scoreboard was 16-13 in favour of the hosts. After that, Russia slowly started recuperating point by point and ultimately drew even at 20-20 supported by some powerful serves of Mikhaylov Serbia then managed to catch a slight advantage to take the set.

Serbia took an early 4-1 lead in the fourth set, and Russia coach Vladimir Alekno had to ask for a time-out. After short break, Russia came back into the match, with neither side willing to relinquish control. But it was the Russians who managed to break away and escape to 25-22 to take the match to a fifth.

Russia were better in the fifth set, although Serbia had some chances, especially before the changing of the sides. By the end of the set, however, the Russian players were more focused and physically in better shape than their Serbian counterparts as they edged victory.

Maxim Mikhaylov and Dmitriy Muserskiy both scored 17 for Russia while for the Serbs it was Sasa Starovic with 22.