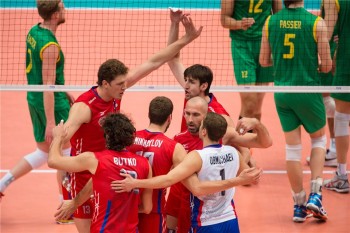 The truth is – only the first set was exciting, and it turned out that it was also the crucial for the outcome of this game. Russia was controlling the match from the start and had a safe lead at 22:18. But then Australia made a huge run! Green and yellows scored 6 points in a row and had two set points – 24:22!!! A single man stopped them from going any further.

Dmitriy Muserskiy scored for 24:23 with strong spike and then it was time for him to serve. Pretty bad luck for Australia, you will agree. The captain of Russia made 3 so powerful serves that Australia was simply unable to create any attack! Maxim Mikhailov converted first two by great spikes (26:25), while then Muserskiy himself finished the set with supersonic kill – 26:24.

All hopes of Australia simply vanished with the end of that set. Russia dominated the rest of the match and scored another easy win at the FIVB World Cup 2015. The top scorer in the winning side was Mikhailov with 16 points, Muserskiy added 9, while Artem Volvich scored 10 points and he was voted the MVP of the match.

WC M: And they say volleyball is a non-contact sport! Be more careful Osmany (VIDEO)

PHOTO OF THE DAY: Vargas in Moscow