Ivan Zaytsev had the best performance so far this year in very important match at the World Cup! Italian opposite scored 20 points as his team smashed Russia in straight sets! 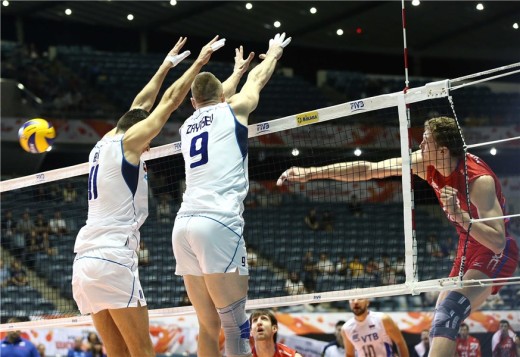 It is a huge problem for Russia! They are now far away from ticket for the Olympic games in Rio. Italy stay in race after today’s win.

At the first TTO in this game, Italy had two points of advantage. After a short break, Blengini’s side went up 12:7! Russian defense was confused, while Italian block was working very well.

They managed to keep the lead at the second TTO, 16:11! A jump serve ace and stunning counter attack all by Zaytsev, Italy increased the lead to 18-11! Afterwards they were leading even by 9, 22:13. There was no chance for Russia to make comeback.

The second set started very well for Russia. They had problems with service errors but managed to make 8-5 lead at the first TTO. A minute later Alekno’s side made 10-6 lead, but with a very good block and Zaytsev’s incredible spikes Italy managed to turnaround the score 11:10. Ivan Zaytsev continued making problems to Russia and after his huge two consecutive blocks Italy were ahead by three (15:12).

After the second TTO, Zaytsev was in the spotlight again. With an ace he gave Italy four points of advantage 17:13. But, Grankin’s block on Lanza reduced the lead of Blengini’s side to one point and he had to call for time out (22:21).

A strong serve of Mikhaylov was the key to tie the score. But, Muserskiy, who was not in the mood definitely sent ball out of bounds and gave Italy two points of lead. Alekno’s move to put in Poletaev on the service line proved right, Russia again tied the score 23:23.

Again Zaytsev was the man who created the first set point to his team, but his service mistake tied the score 24:24. Juantorena scored for the new set point and then believe it or not, Giannelli blocked Muserskiy for big lead of Italy 2:0 (26:24).

Italy started very well the third set and they went at the first TTO with 3 points of advantage (8:5). Afterwards, Muserskiy made mistake and Juantorena blocked Tetyukhin for 12:7 lead of Italy! Moreover, Blengini’s side increased the lead before the start of the second TTO (16:10).

Russia could not make comeback and Italy took the victory, 3:0!

FRIENDLIES W: Sorokaite led Italy to another win over Germany