After many ups and downs in the past months as the team booked their Olympic pass only at the very last minute by taking one of the three world’s Olympic qualifiers held in early June, Bulgaria have turned into the real sensation of the men’s tournament, starting by topping the charts of preliminary Pool A and afterwards extending that great momentum by routing Germany in straight sets in the quarterfinals. 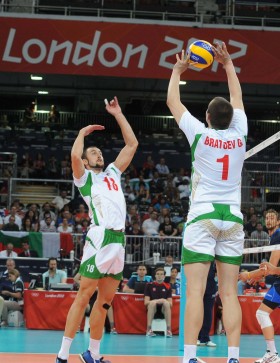 With Tsvetan Sokolov being their major force in offense – with a total of 102 points in six matches, a figure whereby he stands as the second best scorer of London 2012 – Bulgaria have returned back to the top four 32 years after striking silver at the Moscow Olympics. Since those glorious times Bulgaria had found their way to the world’s elite only once, and namely by claiming bronze at the 2006 World Champs in Japan.

Their next opponent along the way to Olympic glory will be Russia, another team that have gone through contrasting results in the lead-up to London 2012. After capping the table of the 2011 FIVB World Cup in Japan, the guys coached by Vladimir Alekno missed out on a spot for the World League finals but eventually got back on track at Earls Court, especially via a classy performance in the 1/4 finals where they literally downed Poland, another pre-favourite for the Olympic title. Their absolute standout Maxim Mikhaylov has clipped a total of 106 points in the tournament, and is an outstanding all-round player whose block and jump serve complete an array of world-class volleyball skills.

Bulgaria will go for a mission impossible having lost all previous matches – eight – with Russia (or the Soviet Union) on the Olympic arena so far. Bulgaria’s last win over Russia dates to the prelims of the 2011 FIVB World League, while Russia claimed the last match-up in the 1/4 finals of last year’s European Championship in Karlovy Vary, Czech Republic.