Russia National Team head coach Vladimir Alekno still has not announced the roster for the 2016 Rio Olympics (the last remained coach in both competitions who did not do it), but one more player was cut from wide list in the meantime. 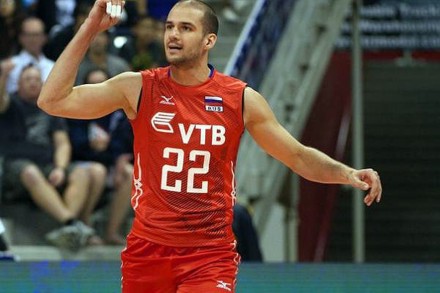 “This morning came a letter which said I was not allowed to play at the Olympics. It’s difficult to say what was the reason, because the IOC (International Olympic Committee) was talking about non-admission of athletes who have been sanctioned for doping, but I was only suspended, not even by any court. Still, the decision was made and I will not file a lawsuit to the Court of Arbitration for Sport (CAS) because it doesn’t make sense to do it since there’s a little time left before the Olympics” Markin stated to “R-Sport”.

Recall, that two days ago, the IOC decided not to suspend the entire Russian Olympic team from the 2016 Olympics, leaving the right to the international sports federations to determine who can perform at the Olympic Games in Rio de Janeiro. It was also said that Russian athletes, who previously had problems with doping, will not be allowed to participate in the Olympic Games.

After long term propaganda, the rabbles succeed to destroy Russian team, and now the legendary coach has no choice to build up a strong roster….now he has only one choice about receivers dimitry volkov and igor klyuka…

What about Max Holt? He was also tested positive. Then there was a comment that Markin can play so Max can also, where is the problem? I wonder what will happen now…

this is unfair for him how about max holt? they should also suspend max holt. thats unfair for markin

All the press is focused only on Markin and Russian NT … about Holt no one word!
What will do FIVB
What will say Wada?

Holt is an American and Markin is Russian… This is the difference…under the pressure of propaganda FIVB changed his decision…politics determine who will suspend and who will not..

ban him. ok. so let’s ban Max Holt. That is fail play. Doping is big problem so Who do wrong are responsible. IOC did not convinced me that they decided a right thing.