Olympic Games are the place for the best athletes. However, not all of them can reach the most important sports tournament... 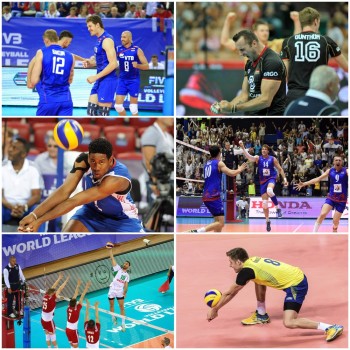 They will not play in Rio

The volleyball tournament in Rio 2016 will definitely be a super exciting competition, filled with very strong teams and amazing players. Still, some of the leading volleyball stars will not be there…

Legendary Brazilian player got cut from the Brazil roster in the very last moment, due to calf injury. Murilo could not hold tears after realizing that he would not be able to play for his country in Rio, while he then announced his retirement from the national team. It was a very sad ending for one of the best volleyball receivers that has ever played for Brazil.

Russian giant will not be able to help his teammates at the upcoming Olympic Games. It was quite a shock when the Russian Volleyball Federation announced that Muserskiy will not travel with the team to Rio, due to injury. Still, he also did not play at the Olympic Olympic Qualifier back in January, but Russia managed to win the tournament and to qualify for the Rio Olympics.

German superstar was not able to help his country qualify for Rio Olympics. Germany lost the thrilling 3rd place match against Poland at the European Olymp;ic Qualifier and therefore failed to advance to the World Olympic Qualifier, which meant that they lost every chance of reaching Rio. Soon after that painful defeat, Grozer announced that he will no longer play for the national team.

One more amazing volleyball player that will miss the Olympic tournament. Serbia played the best volleyball this summer, and won the World League 2016 along the way, however the Serbs failed to win an Olympic ticket in January at the European Olympic Qualifier.

He has been strugling with injuries for a long time, but Tsvetan Sokolov is finally fully healthy. Bulgarian opposite has had some pretty good games in the finish of the previous season, however he will have to wait for the start of the next season to return to the big scene, as Bulgaria did not qualify for the Rio Olympics.

Perhaps the best volleyball player today. Despite his Cuba have secured a place at the Olympics, Wilfredo Leon will not be there. The reason is that Leon has not been playing for Cuba for several years, as he decided to sacrifice the national team career so that he could play in Europe. Actually, we might see Leon at the next Olympics, but in the jersey of Poland…

Would you like to add some other name to this list. Write it down in the comments.

FLASHBACK: Do you remember the most epic leg save ever? (VIDEO)

What about the ladies?