All eyes will be on Trentino Diatec in Doha. But the strongest challenge to Stoytchev’s squad is expected to come from Russian club Zenit Kazan. Read the latest news from volleyball world on worldofvolley.com. 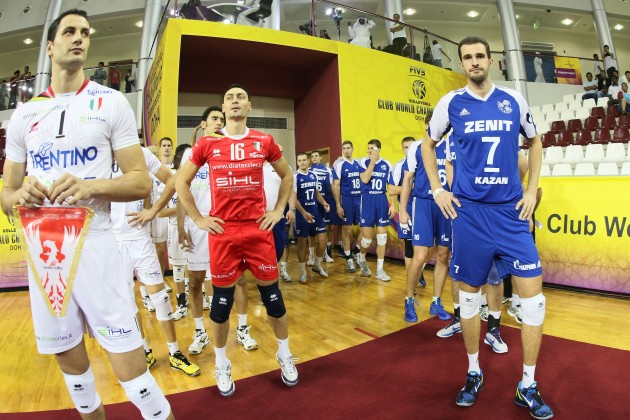 The team began their 2012/2013 season with a heart-breaking loss to Macerata in the final of the Del Monte Cup September 30, and on October 7 they began this year’s Serie A1 with a 1-3 loss to Tono Callipo Vibo Valentia.

Trentino’s star-studded lineup, led by captain Matey Kaziyski, is largely unchanged from the squad that won in 2011. Although Kaziyski missed Bulgaria’s rise to fourth place in the 2012 FIVB World League and the Olympics, he is one of two Bulgarians who have been long-term mainstays for Trentino – the other being Nikolay Uchikov, who is not on the roster in Doha. A third Bulgarian national, Tsvetan Sokolov, is the other notable absence from the squad this year. Trentino have enough quality to cover for his absence, however, with Osmany Juantorena, Jan Stokr and Emanuele Birarelli providing massive offensive power. Supporting these attackers is Italy libero Andrea Bari.

Perhaps the greatest advantage Trentino enjoys is a veteran coach who has guided them through nearly 250 matches, including their three Club World Championship titles. Radostin Stoytchev knows how to win at this level.

The strongest challenge to Stoytchev’s squad is expected to come from Russian club Zenit Kazan. They have their own top-notch coach in recent Olympic gold medallist Vladimir Aleckno. The man who crafted Russia’s triumph over their favoured opponent in the London final will attempt a similar feat with Kazan, but will have to do so without skipper Alexander Volkov, a key player for both Kazan and the Russian national team who is nursing a knee injury.

Kazan’s remaining star power, while thinner than Trentino’s, is just as impressive. Captain Maxim Mikhaylov and libero Alexey Obmochaev were both standouts for their gold-medal-winning team in London, while USA’s Matthew Anderson and Italy’s Valerio Vermiglio bring considerable international talent to the squad.

PGE Skra Belchatow, from Poland, are outside contenders who could surprise the top two teams. They finished second in the 2009 and 2010 editions of the Club World Championships, and can call on the guidance of an experienced coach, Jacek Nawrocki, who has led Belchatow to seven consecutive Polish titles. He will have a difficult challenge in 2012, however, as several of the 2010 team’s standout players will not be in Doha this time around. These include Bartosz Kurek, MVP of the 2012 World League and eighth-highest scorer at the London Olympics, Marcin Mozdzonek, Poland captain and top blocker of the 2012 World League, and French international Stephane Antiga.

Belchatow’s key players this year are Michal Winiarski, Pawel Woicki and Michal Bakiewicz. If Nawrocki can build a winning strategy around them, Skra Belchatow are in with a chance.

Fresh from their victory in the South American Club Championship in September, Brazil’s Sada Cruzeiro are making their first appearance at the Club World Championships. Top young gun Wallace de Souza anchors the team, but they have also managed a major signing in the form of Cuban Yoandy Leal Hidalgo. Leal is making his long-awaited debut for the club in Doha.

Egypt’s Zamalek, which sports several Egyptian internationals, are participating in their second Club World Championship. They will aim to improve on their last performance, when they managed a single win in pool play.

Qatar is supplying two teams to this year’s competition, Al Arabi and Al-Rayyan. Al-Arabi earned their spot in Doha by winning the Asian Club Championships in China, the first time a Qatari team has qualified as a continental champion. Although they have been in the tournament before, representing the host country, each time they bowed out after the preliminaries. This is by far the strongest the team has ever been, and their objective is to reach at least the semifinals in this edition.

Al-Rayyan is this year’s host team. They are the defending Emir’s Cup champions, which earned them the spot in this year’s competition. The team is taking the challenge seriously, hiring four top athletes to strengthen the squad before the Club World Championships. These include the Brazilian stalwart and two-time Olympic champion Rodrigao Santana, the Bulgarian brothers Georgi and Valentin Bratoev, and the American David Lee, gold medallist in Beijing 2008 and in the 2008 FIVB World League, as well as CEV Cup winner with Dinamo Moscow in 2011/2012.

RUS M: Muserskiy about his absence from...