The Romanian team Volei Municipal ZALAU rewarded their fans with a straight victory on home ground against the enthusiastic youngsters from Crvena Zvezda BEOGRAD (25-21, 25-21, and 25-20) in the first round of play for the 1/16 finals of the 2014 CEV Volleyball Challenge Cup – Men on Tuesday. 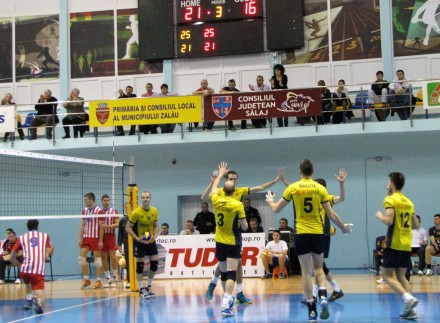 Duško Nikolić, the head coach of Crvena Zvezda BEOGRAD, stated after the match: “We have a very young team, especially for a European Cup. However, I’m quite satisfied with the game our players played, except for some moments when we could have avoided some mistakes and kept the advantage we had. ZALAU is a very good team and they were stronger than us, but I hope that we will win the next match with them, as we are playing at home and we have the support of our fans.”

Volei Municipal ZALAU’s head coach, Aurel Vlaicu, said: “I must admit the Serbian Volleyball school is one of the best in the world, the Serbian teams having some very talented, young players. Crvena Zvezda has very gifted players, who will make the team evolve through the years. We would like to score a victory during the away match and qualify to the next round, but every match is different and we have to be ready for the next confrontation with the Serbian team.”

Do we need to avoid or limit carbohydrates before game?