Srecko Lisinac explained for WoV all the tactic which they had against France while Tomislav Dokic said that he is so happy to be here with the team. 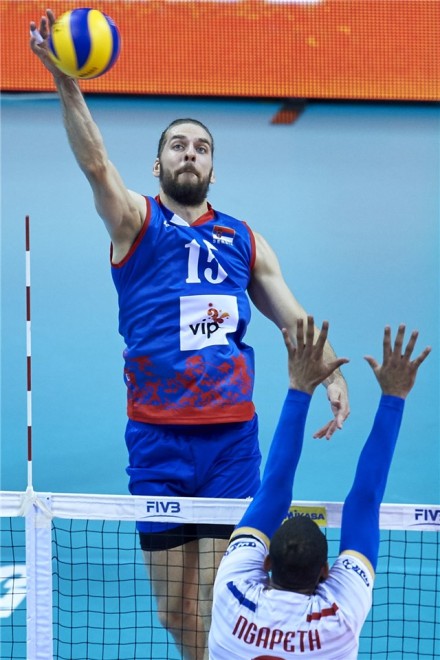 “We started the game without Luburic and some other players that needed to rest for this match as they can be fit for the next matches. The coach wanted to win this game and I think that we played a good game. In the first two sets they put some pressure from the service line and we couldn’t defend that. They deserved to win the first two sets, but in another two we played much better. In the tie-break we were not lucky,“ says Srećko Lisinac for WorldofVolley.

The host won’t play in the semis. Your comment?

“I’m sorry for them. It would be good to play in front of fully packed Arena but we came to play here because of us, for ourselves, not for them or for France” says Lisinac.

Tomislav Dokić “jumped” into the team in the last minute when coach Grbic decided to replece injured Aleksandar Atanasijević:

“I was in Belgrade and I was practicing with Crvena zvezda. Me and a few other guys from the wide list. Ok, we were not in shape like the guys in the squad that came here but we were trying to keep our shape as we could enter the squad if someone picks up an injury. Unfortunately, Atanasijevic picked up an injury and I got a call. I’m happy for getting the opportunity to play for Serbia. France played very good, they served very good especially in the first two sets. After a ten minute pause, we started playing better, they stopped serving good and everything came to our side. We tried to win tie-break, but we didn’t manage to do that. We just want to be ready for the next game” says Dokić, who played the whole match instead of Drazen Luburic, who was resting during this game.

WL 2016, LIVE from Krakow: World League will have new rulers – Brazil to fight for gold!