Some 1’500 fans were in attendance on Wednesday at “Baskent” sports hall in Turkey’s capital city as the home heroes of Halkbank ANKARA did edge their opponents of Knack ROESELARE in straight sets in the first clash scheduled for the Challenge Round of the 2013 CEV Volleyball Cup – Men. This and other volleyball news read on Worldofvolley.com. 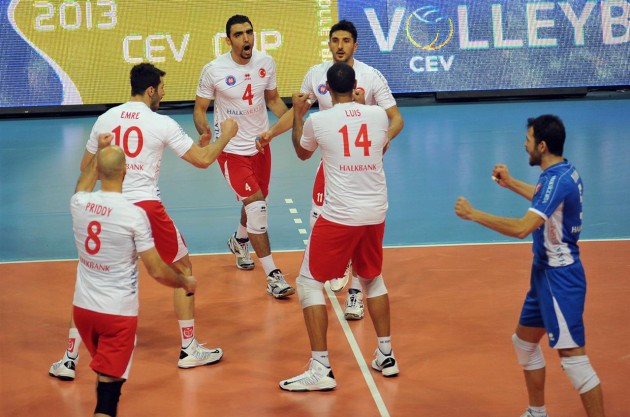 The score was tight in the early phases of the match before US American Reid Priddy showed all of his class and terrific offensive play to pace the home side that went up by the second technical time-out (16:14). Even though Knack head coach Emile Rousseaux asked for a time-out as his guys were trailing 17:21, he could not stop the march of Halkbank that anchored by Priddy and by Egyptian spiker Ahmed Abdelhay pocketed the provisional 1:0 (25-20).

Halkbank did not slow down also in the opening of set 2 by killing a few blocks and imposing its supremacy with Venezuelan wing-spiker Luis Dias Mayorca helping with a few aces and winning spikes (8:5). Things did not change also in the remainder of the set (16:10) with Priddy sealing the 2:0 on the scoreboard with an ace (25-21).

Halkbank ANKARA did not lose control of the operations also in the third set as their play was well marshaled by setter Hüseyin Koc. The home side dictated the tempo of the game all the way through (8:6, 16:11) and could finish it off in straight sets waiting now for the return match coming up next week in Belgium.

Reid Priddy topped the charts of the best scorers with 16 points, including 2 aces, and Halkbank in the end made the difference with their good serve, registering 10 aces vs. only 2 for Knack.