Diatec Trentino returned to Trento in the early afternoon today. After three days spent in Russia World Champion is back in town after Champions League match against Dinamo MOSCOW. Read more about latest volleyball news, games reports, and statistics on WorldofVolley. 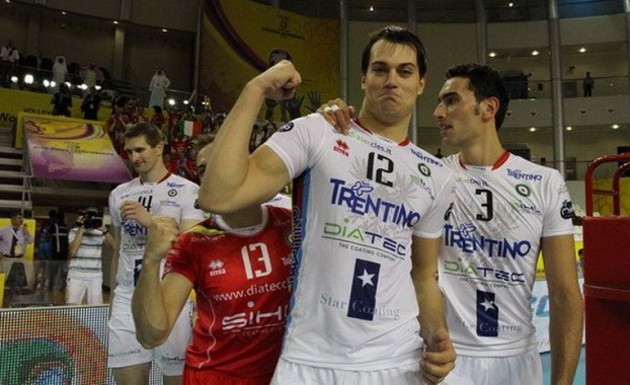 Mitar Djuric one of the best in the match against Dinamo shows that they are already preparing for upcoming commitments. “It is wrong who think that something has changed in our heads than two weeks ago” says the Greek central. “We are the same. We are the team who have won twenty-six games in a row and won the Club World Cup and the Italian Cup. The two-game losing streak should not be taken up negative. It is important to be able to listen to these warning signs. I am convinced that the defeat of Moscow and even more the defeat against Modena can give us further encouragement and energy”.

“The Champions League competition has become more complicated” Mitar continues “but I’m sure that we will find the way against Dinamo and pass the turn. The golden set is not new for us, we have already played against Macerata last March and we know how to win it. We should not panic. We will making the most of these seven days to improve our condition and to better tactical preparation for the second leg”.

“The match on Sunday night with San Giustino in front of our audience is important” said Djuric. “It will not be easy match because in such cases our opponent appears to PalaTrento with no pressure but we need to regain confidence in victory”.