TUR W: No playoffs for Galatasaray; VakıfBank and Fenerbahçe continue fighting for No.1

The multiple titleholders Galatasaray HDI Sigorta failed to qualify for the playoffs of the 2020/21 Turkish Women’s Volleyball Championship.

Losing to PTT in straight sets, partially 28-26, 25-19, and 30-28, in Round 28 of the 2020/21 Turkish Women’s Misli.com Sultanlar Ligi regular season, the 5-time champions Galatasaray HDI Sigorta said goodbye to participating in the playoffs for the first time in many years. In more than a decade, actually.

It was their 4th defeat in a row in the competition after which they remained 6th in the charts, having 3 wins and 11 points less than 4th-placed Türk Hava Yolları (4th place is the last place that guarantees playoff participation) and only two matches to play until the end of the regular season. Bulgarian Emiliya Dimitrova with 20 points (including 4 blocks), her compatriot Hristina Vuchkova (4 blocks), and Bahar Akbay (4 blocks) sealed the fate of Galatasaray today.

Given that 5th-placed Nilüfer Bld. lost to leaders VakıfBank (18th win in a row; 11th in a row in the league), only mere theory can separate Türk Hava Yolları from qualifying for the playoffs. Thanks to American Madison Kingdon (17 points; including 4 blocks) and Ebrar Karakurt (4 aces), they swept Çan Gençlik Kale Spor by a 3-0 (25-15, 25-22, 25-16) and are 2 wins and 4 points ahead of Nilüfer, with both having to play 2 more matches in the regular season. 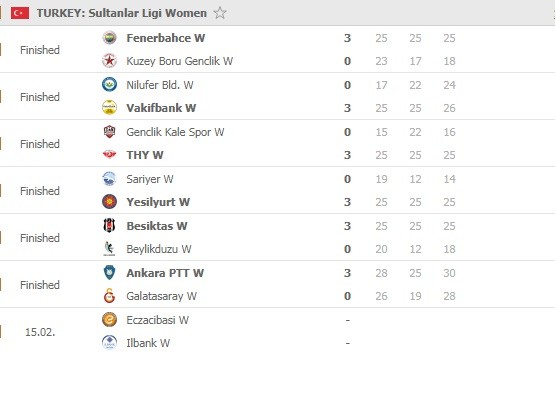 RUS M: Lokomotiv wake up in finish of regular season