Turkey’s Halkbank ANKARA qualified on Wednesday for the final stage of the 2013 CEV Volleyball Cup – Men after cruising to another – the second in about one week – straight-set victory over Ukraine’s Lokomotiv KHARKIV (25-21, 25-23, and 25-22). Read latest volleyball news on Worldofvolley.com. 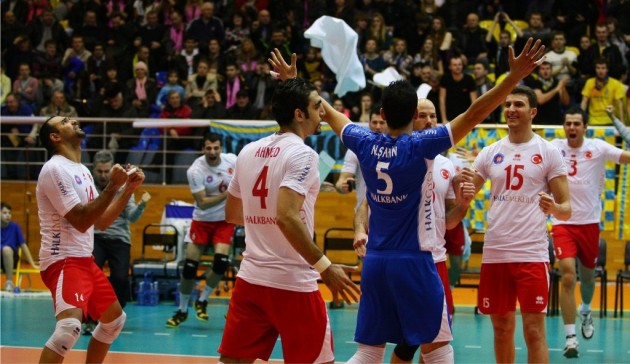 As they followed up on their winning effort from last week, the guys from Turkey’s capital city were anchored by Egyptian spiker Ahmed Abdelhay who scored 20 points in the game, the same tally registered by Lokomotiv opposite Sergey Tyutlin.

After a close start of the game, Halkbank ANKARA could set the pace by the first as well as by the second technical time-out (8:7 and 16:14); going into the final rush with a margin of some two points (21:19), Halkbank showed great quality and composure to bring it home with the score of 25-21. The second set followed a similar plot with the guests from Turkey claiming a very small lead (8:7, 16:14) before they could score the most important points to call for the provisional 2:0. The third and eventually last set was a sort of carbon copy of set 1 and 2 as Lokomotiv could stay tuned up to the so-called money time but once more it was Halkbank that showed a real killer instinct in the last few rallies to claim a well-deserved ticket to the final and play there the winner of the clash starring their compatriots of Maliye Milli Piyango and Italy’s Andreoli LATINA.