In what was the second clash starring two real rookies of the European Cups, Germany’s Aurubis HAMBURG cruised to another 3:0 win (25-21, 25-20, and 25-18) in their 1/4 final fixture with C.S.M. BUCURESTI to advance to the semis of the 2013 CEV Volleyball Challenge Cup and play there Rebecchi Nordmeccanica PIACENZA of Italy. This and other volleyball news read on Worldofvolley.com. 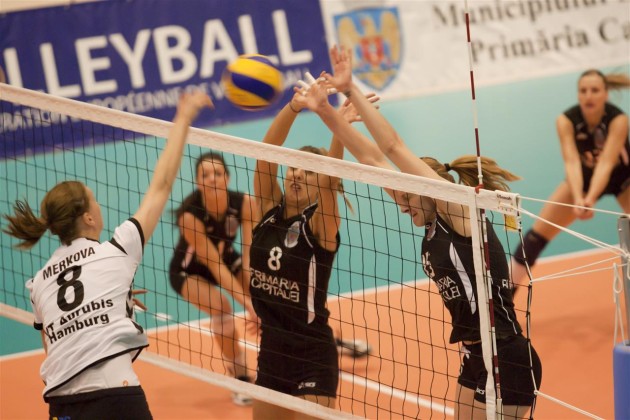 Everything did work just fine on Wednesday for Aurubis as they played C.S.M. BUCURESTI at Sala Polivalenta in Romania’s capital city with 500 supporters in attendance. The first set was quite close and C.S.M. BUCURESTI was able to keep the score tight (20:17) before losing four points in a row as Aurubis sailed away for the final 25-21.

The guests from Germany caught a good start also in the second set (6:2) and got a margin of five after the second technical time-out (17:12), something that the hosts could not compensate for. Things did not change at all also in the third set as Aurubis stormed out to a 9:3 lead and could keep control of the operations up to the very end (25-18) for the second 3:0 win in about one week. Vendula Merkova, Imke Wedekind and Ciara Michel paced the German side with 12, 10 and 8 points respectively.

“We know it will be tough against PIACENZA but I think we still haven’t played our best. We played well here as we had scouted our opponents very carefully after the first match. Our mission was a bit easier as Mariya Karakasheva could not play for C.S.M. BUCURESTI tonight” German mentor Helmut von Soosten says.

The Bulgarian player got injured at her right eye only a couple of days ago. “With her contribution this would have been a different game. However, that’s the way it is and I wish them good luck for the semis” Romanian middle blocker Roxana Ivanof stresses. “Aurubis was the better team tonight and we knew they were strong since the past week. We did hope we could make it to the golden set but it was even impossible to win a set in the end” says local assistant coach Iulian Coiculescu.