Kaštel Sućurac, Croatia, June 2, 2013. Turkey and Slovenia won the first legs of the 2013 CEV Volleyball European Championship - Men 3rd qualification round and moved a step closer to earning tickets to the finals in Poland and Denmark. The Turks shut out visiting Latvia while the Slovenes took a 3-1 away win at neighboring Croatia. 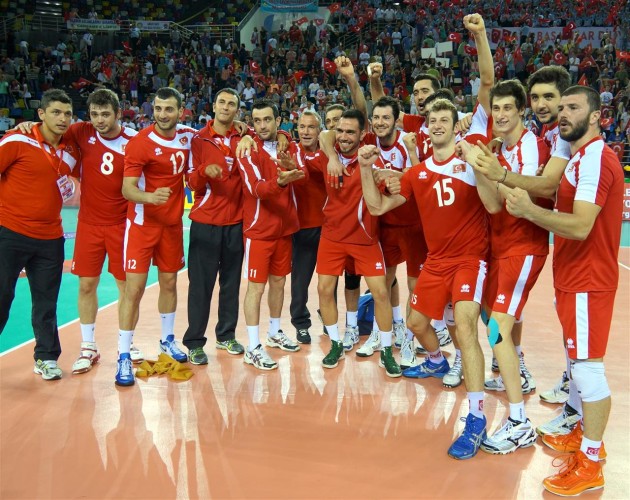 In the official opener of the new Yeni Yasar Dogu Sports Hall in Samsun, Turkey beat Latvia in straight sets. The Minister of Youth and Sports Suat Kılıç, the President of the Turkish Volleyball Federation Ozkan Mutlugil, Vice Presidents M. Akif Ustundag and Mustafa Eksi, Board Members Bahar Mert Üçoklar, Ahmet Göksu, Suat Güler, Hasan Burak Sertcan, İhsan Uçar and Ergin Kaya were among the 4500 spectators that watched the match. Turkey’s Burutay Subaşı and Emre Batur became the top scorers of the game with 15 points each. Gundars Celitans was responsible for 14 of Latvia’s points.

The Turkish team had a good start in the first set and went to the technical time-outs at 8-4 and 16-14. Latvia tried to resist with Deniss Petrovs as its main weapon, but good performance by Burutay Subaşı and Emre Batur helped Turkey win the set by 25-20.

In the second set, Turkey started well again and with the enthusiastic support of the Turkish fans, it was up 8-5 and 16-12 at the two technical time-outs. The home side closed the set at 25-17 with a good contribution by Batur.

The third set was well-contested. After 8-4 and 16-12 Turkey’s way at the technical time-outs, Latvia stepped up its serving efforts and with a point by Gundars Celitans tied at 23-23. However, Emre Batur and captain Ulaş Kıyak scored the next two points for Turkey to finish the set at 25-23 and the match at 3:0.

Minister of Youth and Sports Suat Kılıç came down to the court to celebrate with the team and wished them good luck in the second-leg match scheduled for June 9 in Jeglava.

Veljko Basic, head coach of Turkey: “This was a very important match and we won it by 3-0. Now we are in a very good position for the next match. I want to congratulate all my players for their good performance. Today I am very happy for winning this game, but waiting for the return match so we can finish this qualification successfully.”

Ulaş Kıyak, captain of Turkey: “I am very happy to play this match in my home town. We got a really big advantage before the next game in Latvia. We will try to win one set first, then the match, and make our way to the European Championship. I want to thank my teammates. We did our best today and we will do our best on June 9 in Latvia.”

Slovenia won the first leg of its qualification duel with Croatia by 3-1. In front of 400 noisy fans in the Croatian town of Kaštel Sućurac the visitors managed to achieve the victory after 114 minutes of playtime and are eagerly awaiting the return match at home, in Stozice, on June 8 to seal their tickets to the finals. Slovenia’s Alen Sket and Croatia’s Ivan Raic tallied 22 points each to top the scorers’ chart of the game.

Inspired by the home crowd, the Croats managed to win the first set by 25-22 mostly due to more productive serving. The Slovenes stepped up their blocking efforts and dominated in the second set to break away for the final 25-16. The third set was even only through 11-11 after which the visiting team once again piled up a substantial advantage. As its risky serves started paying off with some aces, Slovenia took this part by the same result – 25-16. Croatia tried to fight back in the fourth set and took a 14-10 lead. However, Slovenia scored 7 points in a row to break ahead and never looked back – 25-19.

Igor Šimunčić, head coach of Croatia: ”The bad serve reception was crucial in this match. In addition we did not use all of our advantages, especially in the fourth set. When the Slovenes moved forward by four points, they played safer and better.”

Luka Slabe, head coach of Slovenia: ”I knew that would the team which received better would win the match. Croatia will be more relaxed and play better in the second match.”