CEV CL: Fenerbahce Universal ready for next round 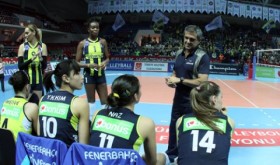 Fenerbahce Universal ready for next round

Yellow Angels won the first game 3-1 away, now they just need another victory to go up to next round.

“We managed to win the hard game last week on road. What we want to do now is to enjoy another victory in front of our perfect supporters. All the players are ready for the match. I hope supporters will fill up the hall on Thursday.” says team leader Seda Tokatlioglu.

Fenerbahce Universal’s Brazilian Head Coach Jose Roberto explained,”I think this match is very important for us. They played very good at home, that’s why we expect another tough match here. Cezch team have strong spikers as well as a talented setter. Opponents did not give up any ball and I think that they are going to be focused a victory. As you know, a win in the first match is essential, nevertheless second challenge is also important to qualify. I mean the winner of this match will have an advantage in terms of reaching final four. To avoid playing a golden set, we will play to win like we did away. Somehow golden set is a kind of gamble everything may be happened. There is no injured player, so the team will definitely be ready on match time. I trust my team because they know their  responsibility in such games. Basically, I would like to appreciate all our supporters in Czech Republic that we also need in Istanbul Burhan Felek Volleyball Hall on Thursday“.

Argentina: Almirante Brown will host the South American 2012 Olympic Qualification Competition next May