Argentina: Almirante Brown will host the South American 2012 Olympic Qualification Competition next May 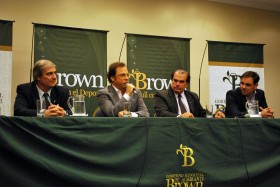 The Argentine Senior’s Men Team will face Venezuela, Colombia and Chile, May 11th – 13th looking forward to their Olympic dream.

There is only one ticket for the winner added to the Brazilian Team that won its place at the 2011 World Cup in Japan.

Different authorities and officials met at the event to show their support on the Olympic path of the light blue – white team.

After the opening words of Mr. Moccia, that reconfirmed the confidence in the Argentine Men Team on this goal, Mr. Gutiérrez pointed out the decision of carrying out the South American Olympic Qualification Competition in Almirante Brown as “the best place, a bet they do with sport“.

Mr. Giustozzi, emphasized the growth of volleyball in his town and the effort of all its authorities to get children out of the streets offering a sport activity.

Almirante Brown was one of the important Argentine 2011 volleyball venues, as one of the successful sites of the Boys’ Youth World Championship and for this 2012 season the Mayor reconfirmed the support of the City Hall for the Argentine Men Team.

Finally, Mr. Weber mentioned the importance of the Olympic Games: “There is no nicer competition“.

Adding: “Therefore we are training hard. It is not a pressure to coach this team. We have a young and engaged team that will give us all happiness and all my confidence is in each and every member of the team”.

All the event was watched by several very important national and international Media.

At the end the journalists had the chance of talking with all the authorities.

The Argentine Senior Men Team will start working towards this qualification competition on April 20th, even though each of the players as soon as they finish with their national or foreign leagues will start working the light blue – white jersey team.

CEV CL: Fenerbahce Universal ready for next round