The home team of Turkey did not miss their first opportunity to please their fans at the “Baskent Volleyball Hall” in Ankara. They showed a classy performance in their opening Pool A game at the FIVB Volleyball Men's U21 World Championship and crushed India in straight sets 3-0 (25-16, 25-17, 25-17). 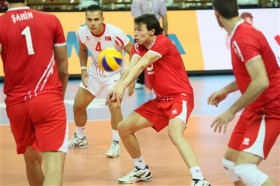 The home guys completely outplayed their opponents in the first set and left no doubt over their intentions in this tournament. With better performance in all elements of the game the Turkish team took the first set by a convincing 25-16.

Their domination continued through the second set. They seemed eager to please the audience with some smart plays on the court and it paid off with a 25-17 at the end of the set.

In the third set India stepped up their efforts to unveil some of their potential and managed to at least stay close behind their opponents in the score for a while.

However, a tremendous blocking performance by the local heroes gave them the comfort to secure a straight-set victory as they increased the pressure in the conclusive moments to rush to another 25-17 at the end of the set.

The Turkish team managed to tally up a total of 12 kill blocks in the three sets of the game. Metin Toy contributed 16 points to his team’s success to top the scorers’ chart of the match, while Baturalp Burak Gungor  added 9. Substitute Kumar Sohan was the best scorer on the Indian side with 7 points.