Vôlei Amil will make its debut in the season 2013/14 on Friday (September 23) with a special promotion for their fans, the “Blue Force”. 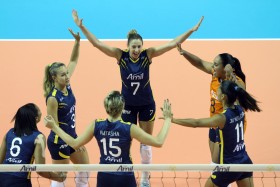 The ticket for the match against São Cristóvão/São Caetano will “cost” 1kg of food! A match for the São Paulo Cup begins at 7:30 PM in “Arena Amil” and the expectation is for full house and reunion of Campinas supporters and fans in the region with the players coached by Zé Roberto.

The rules are very simple. Supporters simply need to bring 1kg of food (not salt or sugar) to the “Arena Amil” and exchange it for a ticket. The gates will be open from 6:00 PM and as the capacity of the gymnasium is 3,200 people, the management of Vôlei Amil recommends that fans should arrive soon to reserve a place on the stands.

“To thank the fans for the unrestricted affection to the club that they had demonstrated daily since the beginning of the project, Vôlei Amil decided to make this surprise for the first game and help those with needs,” says Nelson Garrafa, project manager.

While awaiting reunion with their fans, Vôlei Amil finishes its preparation for the debut in São Paulo Cup.

Assistant coach Claudio Pinheiro Claudinho, led the team while the first coach Zé Roberto is in Japan racing for the title at the World Grand Prix with the Brazilian national team.