Turkey’s Eczacibasi VitrA ISTANBUL is about to start their 12th campaign in Europe’s elite club competition, the CEV DenizBank Volleyball Champions League. This time the players from Turkey’s megalopolis were assigned by the DOL to preliminary pool D together with Germany’s champions SCHWERINER SC, France’s RC CANNES, and Agel PROSTEJOV of the Czech Republic. 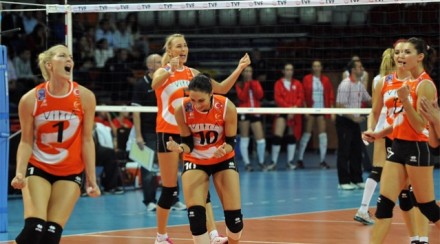 Waiting for their home debut coming up on Thursday at Burhan Felek Volleyball Hall where they play Agel PROSTEJOV, head coach Lorenzo Micelli and two players signed this year by Eczacibasi – US American Christa Harmotto and Chinese star Yimei Wang – shared their thoughts and feelings waiting for the start of this adventure. “With their current rosters all three teams representing Turkey in this competition can make the final four tournament” head coach Micelli said. “However, there are many more clubs also from other nations that have strengthened their rosters and so it won’t be easy for us to make the finals. We also have done the same; we decided to keep some excellent Turkish players – Esra Gümüs Kirici, Gülden Kuzubasioglu, Neslihan Demir, Büsra Cansu, Buse Kayacan, and Asuman Karakoyun – and sign some rising stars of Turkish Volleyball, like for instance Seyma Ercan, Hazal Selin Uygur, Arelya Karasoy and Hande Baladin. To our foreign players Maja Poljak and Senna Usic Jogunica we have added Yimei Wang, Denise Hanke, Christa Harmotto, and Helena Havelkova. Havelkova underwent surgery last August so she will join the team at a later stage once she has fully recovered. I think that this group can stand the toughest opponents and win the trophy at the end of the season”.

As for the teams that his side is going to cross in the League Round, Micelli said: “All teams starring in this competition can cause a sensation. There is no pre-favourite team and we have to be fully concentrated on every single game. We do not know much about Agel PROSTEJOV but they have a good roster. SCHWERINER SC is also a good team but I think that our toughest opponent will be RC CANNES. Our first goal is to finish first in Pool D so as to get a good draw for the Playoffs” he concluded.

“We had a very good preparation phase” said US American middle blocker Christa Harmotto. “Many players were busy with their continental championships so the group came together only at the end of September. However, though we have been together for a very short time, we already feel the right team spirit and the ambiance is very good in the group. I am sure that the quality of our performance will improve throughout the season and we will make it to the final four”.

“I am very happy to be in Istanbul and I am sure that Eczacibasi will be a very important step for my career” said Chinese star Yimei Wang. “I hope this will be a very good season for me and for the team as well”.

“The three teams from Turkey have got the right credentials to make the final four and we are also happy to know that the title sponsor of this competition is a Turkish bank” concluded Club Manager Cemil Ergin. “This title sponsorship shows that Turkey’s Volleyball is developing the right way. We have set very high goals for this season and as Volleyball is booming in Turkey, we want to make sure Eczacibasi is one of those who are driving this process. Our club is doing a lot in this sense; 12 of our players have played in the national team and 15 were with Turkey’s junior national team. We will continue our journey so as to become the best side in Turkey and in Europe as well”.