VakifBank reached number 69! Yes, you have read it correctly – sixty-nine victories in a row for champion of World, Europe and Turkey… 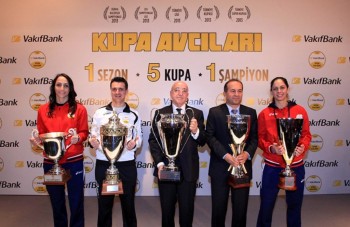 It is a record which you can’t see in any sport, not just in volleyball. It is an accomplishment of which the whole Europe is talking about… Except for one place where you can’t hear a word about it – the locker room of champions.

“That is a great record, but me and my players are not talking about it. Instead, we are focused on the way how to prolong that streak. A champion must always focus on future goals. Make winning a habit. Eventually, we will lose some match, but that doesn’t matter. The important thing is to win all the trophies, not games” – started Giovanni Guidetti interview for Turkish media.

Coach of VakifBank added that competition is fierce on all fields:

“We know that everybody wants to beat us. Look just at the clubs in Turkey. Some teams have 5-6 foreign players, which means they have invested a lot of money. There are still four foreign players in VakifBank, and our secret is not in money, but in respect towards opponent and hard work. We are preparing for every game like it is the finals.”

Guidetti concluded that he is extremely happy in current club:

“I consider myself fortunate for being able to coach team like VakifBank. I am living a dream, and I don’t want to wake up. My mission is to continue to win, and keep all the trophies in the club.”