Ankara, Turkey, April 17, 2012. Turkey’s national team has started their preparations for the Olympic qualifier that will run through this coming May 1-6 in Ankara and whose winner will book a trip to London 2012. 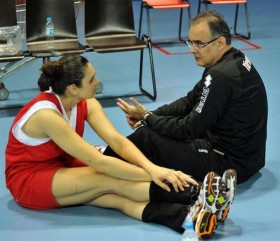 The players mentored by Marco Aurelio Motta will be having two training sessions a day – with two days off on April 24 and 29 – and play two friendly matches with the Netherlands to fine tune their lead-up to this home Olympic qualifier.

According to their head coach, this tournament represents a great challenge.

“We have no time to go for major changes in the group; we just have to work hard and concentrate on our tasks. We may get a unique opportunity to qualify for the Olympics and we shall be good enough not to miss it” says Motta who feels Russia will be the major favorite of the tournament as long as they travel to Ankara with their best players.

“Apart from Russia, Germany, Serbia and Turkey are in my opinion the real contenders for this Olympic berth. However, the best team on paper does not always claim such a kind of tournaments and there are always surprises round the corner. Our defeat to Croatia in the final round of the European Championship is a good example in this sense” he adds. Middle blocker Özgenur Yurtdagülen was recently added to the team but Motta stresses she will not be retained for the group that he is about to line-up for the Olympic qualifier.

“She is here with us just to make her ready for the next major competitions” reveals the Brazilian-born mentor.

The Olympic qualifier is joined by 8 teams (Turkey, Serbia, Germany, Bulgaria, Croatia, Russia, Poland and the Netherlands) divided into two preliminary groups whose first and second ranked sides will play crossed semifinals before a pass to London 2012 will be assigned to the winner of the final match.