“Yellow Angel” (named by the fans), Naz Aydemir, young rising star setter of Turkish Women's volleyball has declared her leave after being champion in European Chapions League this year. 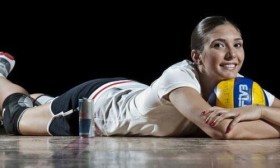 She is leaving Fenerbahçe women’s volleyball team after having marvellous 3 years with 2 national cups, 1 World championship (Doha), 3 consecutive participation in CEV’s CL W and finally 1 Championship in Champions League in 2012.

Although it is not officially declared Naz Aydemir will be signing a new contract with Vakıfbank Türk Telekom, Istanbul.

Beautiful setter has become a hero of the Fenerbahçe fans and was being supported heavily in the last 3 seasons. In that sense Fenerbahçe fans are quite angry about her leave since she also had said to her fans “I keep being your yellow angel, do not worry, still negotiating with my club…“

Naz Aydemir is also the main setter of the National Women’s Volleyball team and will be participating to Grand Prix and London Olympics before she starts new season.

RUS W: Kosheleva will be held at the Munich clinic for medical examination