written by WoV May 6, 2016 source: voleybolunsesi.com

The head coach of the European champions Pomi Casalmaggiore is close to move to Turkish league again. 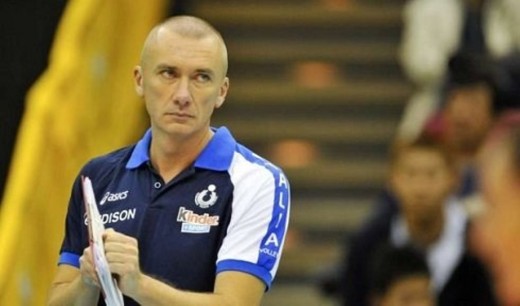 Massimo Barbolini was a coach of Galatasaray from 2012 until 2015 and he has experience of working in the Turkish championship. He also was a coach of Turkish national team (2013-2015).

Barbolini made a huge success in the last season. He took over Pomi Casalmaggiore in 2015 and after a half of a year of work he managed to win the CEV Champions League.

It means that Caprara is likely to leave the team…

When Barbolini coached Galatasaray and then Turkish National team, Eczacibasi was making fun of him. This club is real bizarre.

@Ali Y Why bizarre? And the other two are serious, Galatasaray and NT???

@Axe Eczacibasi believed that Barbolini does not have enough quality, now they are considering him. They have done the same thing to Neriman. She was wrong to return to a club which showed no respect to her skills beforehand.

@Ali Y Looks like Neriman plays good only outside Turkey. Also for Barbolini. It is true that being a coach in Turkey is not so easy job to do… Anyway, in Turkey they like Italian coaches: Guideti, Abbodanza, Nesic, Barbolini, Bonita…

@Axe no, Neriman played very well for Galatasaray, we love her. She left us due to the fact that we can not compete with the other top 3 teams with this 3 foreign players rule. This top 3 teams share all quality turkish players so no matter who we chose as foreign players, our turkish squad were not enough. That is why we turn back to youth team to raise our own local girls. So it has paid of this year. Now we have a turkish setter, and a turkish middle blocker. Our libero is ok. Our opposite is centoni, the other blocker is snead jack. We have receiver problem. In case neriman returns to us, we will have a nice chance to the turkish final appearance.

@Ali Y So it means that Galatasaray to win will have to ‘steel’ one of Turkish good receivers from Vakifbank to win? I agree but Galatasaray will aslo have to try to make 2,3 receivers. It takes time but in 2,3 years can pay of and situation will be on favore t oGalatasaray instead of Vakifbank, like now is. And there also has to be good coach to teach them in this years

@Axe Vakifbank is not our target directly. First, we should be among top 3, that means CEV CL, then we can increase our reputation so that we can lure some best players. Afterwards, we can target turkish finals and Vakifbank. At the moment, Vakifbank has the best turkish players + best foreigners. Look at them, best receivers of USA and China + best middle of Serbia. This year, if we find a good offensive receiver, and a turkish substitute, we may prevail Fenerbahce or Eczacibasi. We will see.