After four competition days in Pool I, host Turkey as well as Serbia have already claimed their semifinal spots at 2012 CEV Junior Volleyball European Championship – Women. 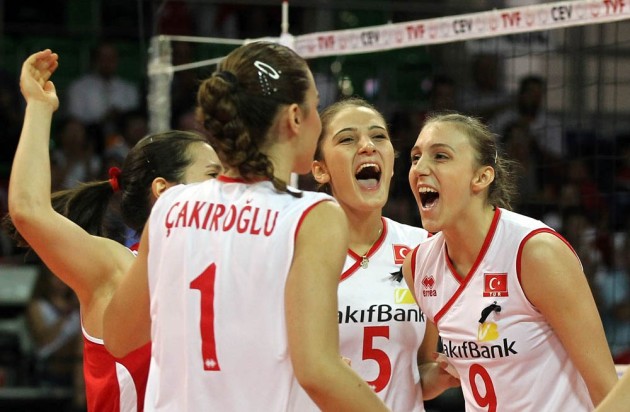 In front of 1’600 thrilled spectators, Turkey beat Slovakia 3:0, whilst Serbia overpowered Belgium 3:1. France (straight-set defeat versus Slovenia) lost their last chance to qualify for the classification round. “Les bleus” as well as Slovakia will have to pack their bags after Thursday’s last Pool I matches.

Host Turkey kept a clean shirt at 2012 CEV Junior Volleyball European Championship – Women by beating Slovakia in straight sets (25-21, 25-17, 25-13). Like their rivals from Serbia, Turkey improved their win-loss record in Pool I to 4-0. Best scorer of the match was Turkish middle-blocker Asli Kalac with twelve points, whilst Miroslava Rehakova booked seven kills for Slovakia. Although Slovakia had lost all their Pool I matches so far, the team of head coach Eva Kosekova showed a remarkable fighting spirit. It needed all the power and speed of the Turkish team to overcome their adversaries, particularly in the first set. Turkey led 8-5 and 16-13 at the technical time-outs, but helped the Slovaks to bounce back to two points (23-21). However, it was captain Damla Cakiroglu who hammered the Mikasa through the Slovakian defense to give Turkey a hard-earned 1:0 set lead. The story of the match didn’t change in the second and third set as the Turks set the pace with clever block-defense work and an extraordinary productivity in attack. On the other side, the Slovakian spikers still experienced too many difficulties to score (17-25). The match was over as a contest now, but the young local heroines still continued their show to delight the 1’600 faithful fans at Baskent Hall in Ankara. After 74 minutes of play, head coach Gökhan Edman’s ladies booked their fourth win in Pool I (25-13), securing them their spot for Saturday’s semifinals.

Two weeks before the men’s juniors will battle for medals in Denmark and Poland, Turkey is in the spotlight for the prominent CEV event at Baskent Hall that hosts Pool I and Ahmet Taner Kislali Hall featuring Pool II. A total of 38 matches are played during the tournament, running from August 18-26.