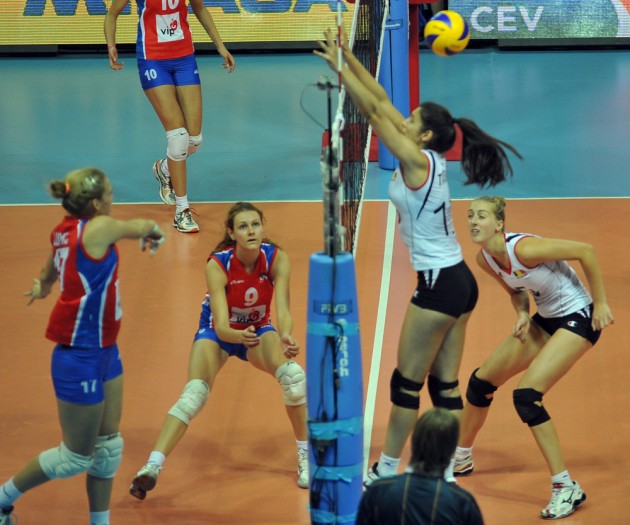 Hence Serbia continued their winning streak at 2012 CEV Junior Volleyball European Championship – Women with their fourth consecutive triumph, before facing Turkey in Thursday’s “final” of Pool I. Best scorer of the match was Serbia’s opposite Natasa Cikiriz with 21 kills, followed by captain Bianka Busa and middle-blocker Jelena Trnic with 15 points each. Belgian Karolina Goliat scored 15 times for the losing team.

The Serbian squad jumped out for a convincing 18-11 lead in the first set, but helped their opponents bouncing back with a quite nonchalant attitude. The scoreboard showed 23-23 when the young Serbian talents remembered their qualities. A sharp Cikiriz serve made Celine van Gestel sweat to offer the first set after all to Serbia’s side. It seemed as it was a wake-up call for the team of head coach Ratko Pavlicevic as in the second set there was only one team playing (25-13). Nevertheless, the Belgian ladies showed once more their outstanding fighting skills as they came back bravely in the third period. At the second technical break, Belgium already led by four points, before Karolina Goliat fired two missiles to bring her squad back on track (25-20). The plot of the match didn’t change in the next set, at least not until 13-6. It seemed as at the moment the Serbian players decided to start fighting again. As a consequence, the Belgian spikers couldn’t find any free space at the net with seven (!) Serbian block kills in the second part of set No. 4. After 103 minutes of intense play, Serbia finally booked their fourth victory at 2012 CEV Junior Volleyball European Championship – Women (25-20).

Serbia head coach Ratko Pavlicevic: “Congratulations to Belgium, they never gave up. They found solid solutions in the third set, but we managed to counter them at the end of the fourth set with excellent block-defense work.”

Serbia top scorer Natasa Cikiriz: “Tonight we proved our strong mental skills. We knew that we were able to come back. Our fantastic block play gave us wings to do so.”
Belgium head coach Julien van de Vyver: “I guess we deserved at least one point tonight. We had the chance to win the first set, then again the fourth. My players showed remarkable fighting spirit.”