In today’s first Pool I clash, Slovenia secured their ticket for the round of the best eight teams at 2012 CEV Junior Volleyball European Championship – Women. 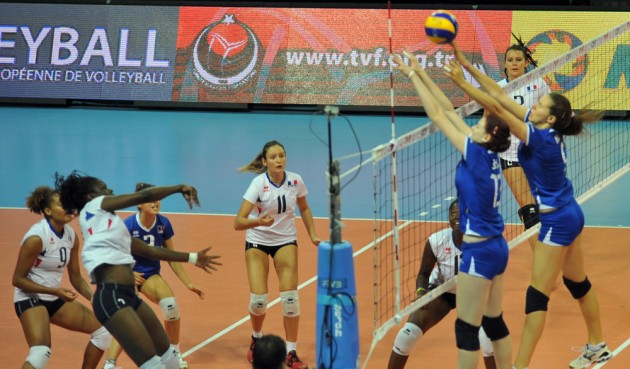 The young Slovenian talents beat France in straight sets (25-21, 25-19, 25-22) to send their challengers home. Slovenia jumped out for an 8-6 lead at the first technical time-out, but there was not much to separate the two opponents in the beginning of the match. Lana Scuka, Iza Mlakar and captain Nika Blagne booked some astonishing points for the East Europeans, whilst on France’s side Elisabeth Fedele was the most efficient player at the start of this important duel. Things were still close at 21-20 for Slovenia; nevertheless the French players seemed to be too self-doubting to run past their adversaries (21-25). It was still no outstanding demonstration for top volleyball in the second set as both teams experienced too many unforced errors. The French youngster struggled with passing, whilst Mlakar as well as middle-blocker Elena Kucej hammered the Slovenians to a merited 2:0 set lead. Slovenia had nine service winners after two sets, France only three. The story of the match didn’t change in the third and last set as Slovenia never looked back (25-22), increasing their win-loss record to 2-2 at the 2012 edition of CEV Junior Volleyball European Championship – Women.

Slovenia head coach Bruno Najdic: “For sure we felt some pressure today. We needed this win to advance to the next round. However, the girls were focused, even when we didn’t play the match of our life. However, we served much better than France.”

Slovenia captain Nika Blagne: “We were ready to go all-in today. We managed to put a lot of pressure on the French receivers.”

France head coach Jacques Beraud: “Development includes moments like that one. We have to learn dealing with pressure, that’s why it’s very important to take part in such important tournaments.”

ARG: U 16 North Patagonian teams qualified for the Argentine cups