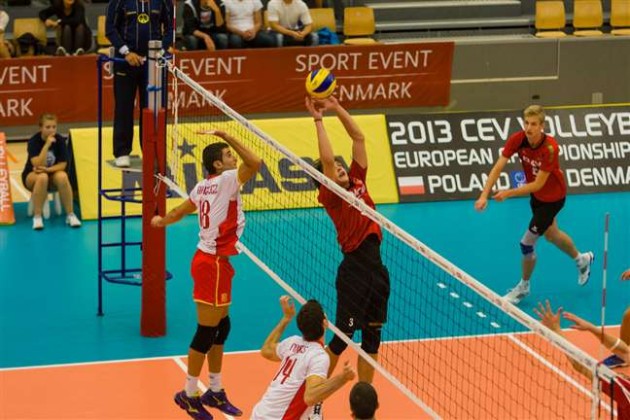 It was Spain asserting its supremacy all through the first set. The Spanish team increased their lead nice and slowly and was in front 16:10 by the first technical time-out. Spain seemed stronger in many facets of the game and German head coach Ulf Quell was forced to a team time-out while trailing 10:19. It helped only a little and Spain eventually cashed the first set 25-16.

Germany seemed more focused in the second set, but was behind 8:7 at the first technical time-out after a serve into the net. Not much separated the two teams as Spain was in front 16:14 by the second technical time-out. Then Spain leveled up their game and took three points in a row to 19:14. The German spectators tried to encourage their team to the set win, but Spain closed it out at 25-23.

All was even in the beginning of the third set but Spain managed to move to the front by the first technical time-out (8:7). The German team showed great mental strength and turned the set over to a 16:12 lead by the second technical break. Germany stayed focused and finished it off at 25-20.

In the first fourth set of the tournament Spain meant serious business leading 8:3 by the first technical time-out. Germany denied to give up and fought back in the set, being behind 16:13 by the second technical time-out and ultimately leveled the set at 17-17. But then Spain took three points in a row to 20:17 and wrapped it up at 25-22 for the final 3-1.

A relieved Spanish head coach Ricardo Maldonado said: “It was a really hard match. We did not play well in long periods of the match. I especially think we had problems with our reception because Germany served really well. We need to improve our character or things will become complicated. We still take it match by match. This is a tough Pool that is very even. After our next game against Turkey, who seems very strong, we will have a more clear idea of our chances”.

A massive wall of sound from both Danish and Turkish spectators filled the Skyline Arena for the second match of day two in Randers. Turkey continued their straight sets win by beating Denmark 3-0 (25-16, 25-17, and 25-16) and top the charts of the group after two rounds of action. It seemed like the Danes were not really ready from the beginning of the set and Turkey could take a little break by the second technical time-out being in front 16:10. The Turks kept increasing their lead and the set win was never in doubt – 25-16.

The Turkish thunder kept lightning in the second set and Turkey was in front 8:4 by the first technical time-out and 16:7 by the second. Never looking back the Turks won the set 25-17.

The third set was a bit closer, but Turkey had the upper hand all the way through and won it 25-16.

Turkish head coach Ali Kazim Hidayetoglu commented: “We played very well today. We had made a good game plan and all the players fulfilled their tasks to perfection. It was a good result for us. Denmark has some really good players with potential to play at a high level. Their opposite Peter Trolle Bonnesen has a great career ahead; that is for sure. I dream of a place in the semifinals but we still have to meet some strong teams in the group”.

ECJ W: Serbia and host Turkey to battle for gold in Ankara