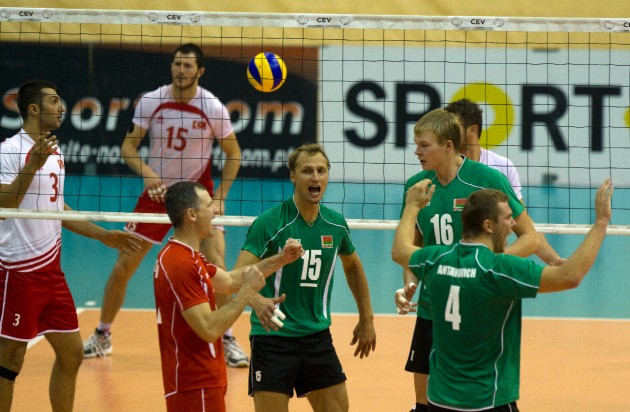 Portugal showed great determination to come back from 1:2 in sets and compensated for the poor performance displayed in set 2 and 3 by cruising to the final 3:2 win. Great Britain set the pace of the game almost all the way through in the first set but Portugal ended up by seizing it with the score of 26-24; Team GB reacted by taking the next two and playing extremely well in attack. After that Portugal re-adjusted their block and reacted in the best way, stepping up also in defense to eventually bring it home at the tie-break. Alex Ferreira paced Portugal with 20 points while Joel Miller top scored for Team GB with 14.

“It was our first win in official matches this year and it was a tough game” said Portugal mentor Flavio Gulinelli. “Everything got more complicated after the second and third sets, but we made some changes and it worked just fine until the end of the game”. “It was a difficult game, luckily we claimed the first set but honestly I do not know what happened afterwards. I think we showed our real value in the remainder of the game” stated captain Joao Jose.

“I have to congratulate my players for their performance especially since Portugal is a strong team as they recently demonstrated in the World League matches against the Netherlands” said GB coach Joel Banks. “I am pleased with our performance in the first three sets but then we lacked stamina. It is nevertheless good that we could take one point from this match. I think if we can display that quality in all matches, we may go for the second place in the group” singled out captain Ben Pipes.

In the other match of the day Belarus surprisingly edged Turkey 3:1 (25-17, 27-25, 23-25, and 25-20). Belarus started out very determined and dominated the scene in the opening set (8:2, 16:10, 21:15) with Turkey being not able to score and find a way through the Belarusian block. The set ended in a speedy 25-17 while the score remained tight in set 2 with Belarus opening the gap after the second technical time-out with an ace by Oleg Antanovich (19:17). A block on Emre Batur moved the score up to 22:19 before Turkey responded with some good serving, but still Belarus could seal the final 27-25. Turkey cruised to the 24:19 in set 3 that was eventually finalized at 25-23 but Belarus got back on track in set 4 (8:7, 16:15) eventually seizing the day (25-20) for a well-deserved 3:1 win. “We are very pleased; we know Turkey well as we played them quite many times. We practically did not make any mistake in the first two sets, Turkey played better in the third but then we stepped up once more to take the win and be the leaders of the group” said Belarusian coach Viktor Sidelnikov.

“I am very disappointed with my team’s performance but the tournament has just started and we are ready to fight for every single point and set. We hope to win our next match against Great Britain” stressed Turkey’s mentor Veljko Basic.