Vakifbank is going to steal Fenerbahce’s spotlight this season! It appears that the 2010/2011 Champions League winners have increased their budget this season because they have signed up the world’s brightest female volleyball stars. Joining Maggie Glinka (POL), Jelena Nikolic (SRB) and Christiane Furst (GER) are… 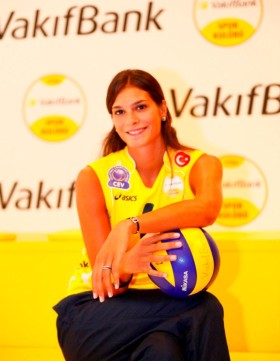 The 2012/2013 Turkish League is going to be VERY VERY EXCITING this season!

We wonder how coach Giovanni Guidetti will manage his players. What a star studded team! We have a feeling they’re going to win major tournaments this season, ie Turkish League and of course the prestigious Champions League.

Also, we’re so excited to see Saori’s connection with Naz Aydemir. Saori is so used to Takeshita’s setting while it’s going to be Naz’s first time setting a Japanese superstar who is more effective with quicker sets to the outside (position 4).

Turkish League fans will also get to see the showdown between Kim Yeon Koung of Fenerbahce and Saori K.