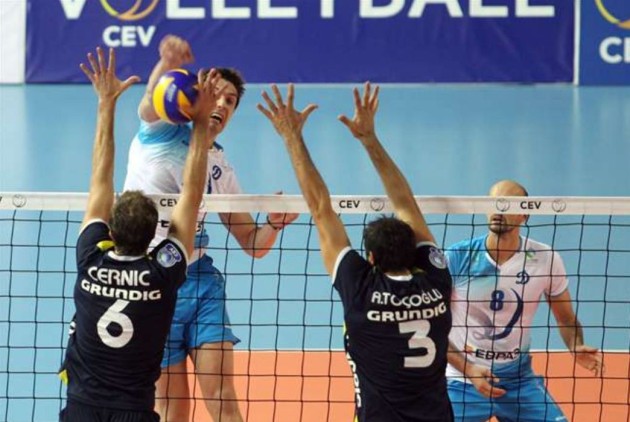 The home side immediately got troubles in reception against the strong Russian serves (4:9), while Pavel Kruglov dominated the game via his high attacks (11:16). Even though Ivan Miljkovic tried hard to recover his team back (14:17), Dinamo claimed the first set quite comfortably (18-25).

After having an early time-out at 2:6, the local heroes bounced back and set the pace by the first technical time-out (8:7); Fenerbahce was still up 16:13 by the second mandatory stop, Dinamo could draw level at 16 all and a furious battle unfolded before Fenerbahce made two consecutive errors to contribute the final 23-25 for Dinamo MOSCOW.

The hosts opened quite strong in set 3 (6:2) and Leonel Marshall added two blocks to the count (8:3); Fenerbahce did not lose composure this time (17:12) before Dinamo could claw back to -1 (24:23); this time the final rush belonged to Fenerbahce and a serving error by Alexander Markin sealed the 25-23 for the local heroes.

Fenerbahce caught a good start also in set 4 (4:1) but Dinamo MOSCOW went up 12:16 by the second mandatory break; helped by their supporters, Fenerbahce fought back from 14:19 to 19 all and a few more ties followed, before Dinamo scored four in a row for the final 21-25 that sealed that 1:3 away win with Pavel Kruglov top scoring with 17 points.

The head coach of Fenerbahce, Daniele Bagnoli, commented, “The most important thing for us is to understand where we stand on the international arena. Although they did not have two foreign players today, they played their regular game and won. Congratulations to Dinamo”.

Captain Arslan Eksi concluded: “We should have beaten Dinamo today because they were missing two foreign players. We haven’t played good Volleyball in recent times due to our problems. What we need is to play better and win a few matches”.

Dinamo MOSCOW mentor Yury Cherednik stated: “We were good enough to win today but I think Fenerbahce is not in a good shape. Our chances to make it to the next round have increased after this game”.

The Russian team’s libero Roman Bragin added: “We did not play with our foreign players today but we still could beat the rival. Our level should be higher”.