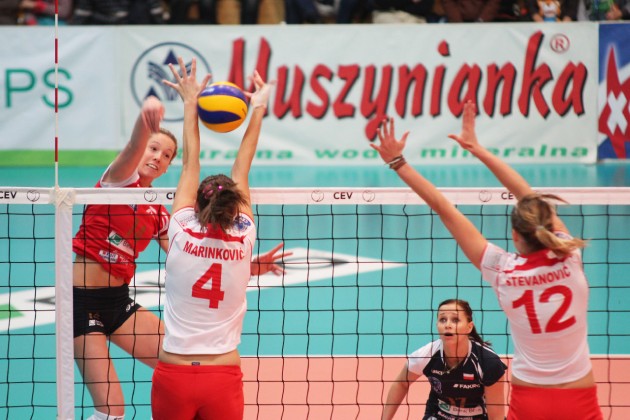 The young girls from Serbia played with glowing hearts but eventually it was not enough to stand the experience and quality of their opponents. MUSZYNA’s record moved up to 1 win and 1 loss while Crvena Zvezda has lost both matches played so far.

The head coach of Crvena Zvezda had to ask for his first time-out by the score of 10:4 for Bank BPS Fakro in the first set but this did not help as the local heroines moved up to 17:6. The guests finally found their way into the game but still it was too late and the set ended in a massive 25-13 for MUSZYNA.

The plot did not change much in the second set where MUSZYNA imposed its rhythm right from the start and quickly cruised to the final 25-15.

The actions of the local side were accompanied with loud support in the third set and even though Crvena Zvezda played intelligently and did not surrender up to the end of the match, still the good blocks and defense of Bank BPS Fakro paved the way for another 25-15 and the final 3:0.