Behind a season-high .407 (40-5-86) hitting percentage, No. 1 Texas cruised to its seventh Big 12 Conference sweep (25-12, 25-13, 25-17) Saturday afternoon at Texas Tech. The Longhorns increased their win streak to 15 matches and improved to a perfect 12-0 in the league to maintain first place in the conference standings with four regular season matches remaining. 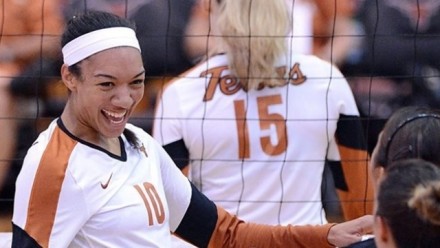 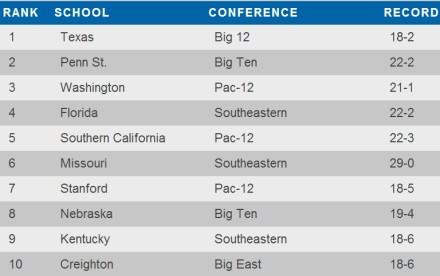 Back-to-back Eckerman aces broke a five-all tie in game one and Texas (19-2, 12-0 Big 12) led Texas Tech (9-20, 2-11 Big 12) the remainder of the set. Eckerman and Webster combined for eight of the Longhorns’ 12 kills in the opening set with five and three, respectively, while middle blockers Khat Bell and Sara Hattis had two apiece. The Longhorns outhit the Red Raiders .370 (12-2-27) to nothing (9-9-33) to set the offensive pace for the afternoon.

Texas’ defense accounted for three of its first six points as the Longhorns stormed ahead to a 6-1 advantage in the second set. A 4-3 run by the Red Raiders brought them within four points, 9-5, but it was as close as they’d come as the Longhorns took a 2-0 lead into the third game behind a 25-13 game two win.

Game three mirrored the first as the two teams were neck-and-neck in the early stages before Texas snapped a 4-all tie with an 8-3 run for a 12-7 lead that Tech was unable to overcome.