Matt Anderson has been named USA Volleyball’s Athlete of the Year for a second season in succession. 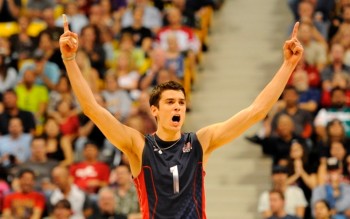 Over the course of a year he has gone from being the team’s youngest player at the London 2012 Olympic Games to being captain at the 2013 FIVB World League. He played in all 39 World League pool matches and led the team in scoring.

“The greatest challenge for me this summer was to start carrying myself at a more constant level,” Anderson said. “I was trying to be an example and a steady figure for other players to balance their game around. I guess it’s a growing-up, maturing athlete position.”

Anderson plays for Russian club Zenit Kazan with which he successfully qualified for the play-offs in CEV Champions League.