CEV CL: A full house will be cheering on Zaksa for second “battle of Titans” with TRENTINO PlanetWin365

Kedzierzyn-Kozle, Poland, December 18, 2011. After scoring an amazing away win this past Wednesday in Italy, the supporters of Zaksa KEDZIERZYN-KOZLE – and actually the whole of Poland’s Volleyball community – can barely wait for the return coming up in a few days and whereby the home guys will try to stretch their winning streak by defeating once again the triple European and world champions of TRENTINO PlanetWin365. 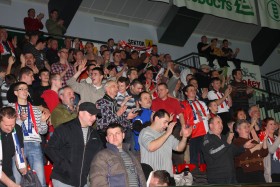 Zaksa is the very first team from Poland that was able to score an away win on Italian ground for the past 5 years, at least as far as the CEV Volleyball Champions League is concerned.

PGE Skra BELCHATOW had indeed claimed even a straight-set win at home over an Italian side but the return match had regularly turned into a failure for Poland’s most decorated Volleyball club of the past decade.

“We are no longer thinking about the match we played in Italy because what is coming up this Thursday here in Poland will be a totally different story” says Zaksa wing spiker Michal Ruciak.

“We have to be ready to cope with a very aggressive performance of the Italians” he adds “who will try to impose their rhythm and play right from the start”.

“I think they performed a little below their usual standards” says Ukrainian Jurij Gladyr who is back from an injury.

“This is normal and can happen to anyone; we also lost 2:3 to JASTRZEBSKI Wegiel” adds the middle blocker.

“My players are very determined and will be focused from the very first rally and then onwards” stresses head coach Krzysztof Stelmach. After playing a match of the national league on Sunday with AZS OLSZTYN, Zaksa will be back at home and start preparing for the clash with TRENTINO.

All tickets are already sold-out for what the Polish media have described as “the battle of Titans”.

“We shall have some 3’000 fans in attendance and regardless of the final score this match will be a unique Christmas present for everyone” says club President Kazimierz Pietrzyk.

CEV CL: ASPTT MULHOUSE has a dream to fulfill this coming Tuesday