Lodz, January 17, 2012. PGE Skra BELCHATOW had assured the promotion to the Playoffs 12 of the 2012 CEV Volleyball Champions League already this past December, but after the disappointing performance in Tours last Thursday, it is far away from the top spot in Pool F. 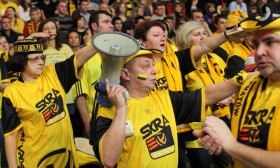 To advance to the Playoffs 12 as the first-ranked team of the group the Polish champion has to beat Budvanska Rivijera BUDVA in Lodz and wait for the result in Ljubljana where ACH Volley hosts the leader, TOURS VB.

In front of these matches the French team has a margin of one point that PGE Skra has somehow to cut.

Budvanska Rivijera lost to PGE Skra 0:3 in the opening match of Pool F and managed to win only 3 sets so far in the 2012 CEV Volleyball Champions League.

“We are the strong favorites but we must not underestimate our opponents. We just have to do our best” states PGE Skra coach Jacek Nawrocki.

“The crowd will be a great motivation for us. The people will play together with us, play for the win. Their satisfaction will be for us the best reward, equal to the motivation to grasp 3 points. We believe it may be enough to overcome TOURS VB. The French team and ACH Volley LJUBLJANA are pretty equal and I am convinced that the Slovenian champion may beat TOURS VB”.

PGE Skra captain Mariusz Wlazly cannot agree more with the coach: “We still have much to play for. Firstly, for the top spot in the group that gives a good draw for the Playoffs 12. We played poor in Tours last Thursday, in the previous match of the Pool, but we managed to win a very important league match in Kedzierzyn on Sunday, and now we want to back up our morale with only a few days for the final of the national cup coming up this weekend” he says.

The best team from Montenegro did not have the chance to train in “Palace of Sport” in Lodz, as it landed in Warsaw at 7 pm and arrived in Lodz late around 10 pm.

“We should train, but we had such a travel schedule that it was not possible. However, it does not matter in this situation – PGE Skra is a strong favorite. We will try to play as good as possible, but our chances look limited. I realize what the situation is” states Veselin Vukovic who arrived in Poland ill, with a high temperature.

The coach of Budvanska Rivijera was in charge of Montenegro national team during the 2008 edition of the “Wagner Memorial” in Olsztyn and he remembers well the match versus Poland.

“We lost 0:3 but the atmosphere was amazing. I just cannot wait for the moment I see the spectators in Lodz. They will make both teams play their best” he stresses.

“We expect a full house for the third time in a row. Over 9’000 fans always make me happy. Such a crowd gives us a lot of energy, and we will show it to thank the fans for all their support. The team is ready to fight for the win and I am ready to fly to Luxembourg for the DOL” says club President Konrad Piechocki.

CEV VC: MONZA does not take return match with BERLIN too easily