Luxembourg, January 19, 2012. The city of Lodz will be the venue – for the third time in the last 5 years – of the final four that will crown and celebrate the winners of the 2012 CEV Volleyball Champions League – Men. 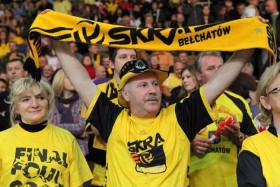 After playing host to this major event in 2008 and in 2010, the club of PGE Skra BELCHATOW was assigned the right to stage the event thereby advancing directly to the last stage of the competition as per the official regulations of the European Cups.

“After 2 years we are going back to Poland and I already wish the hosting club a very successful Volleyball festival, knowing that they will be doing a great job and that the same applies also to Azerbaijan that will host the women’s final” commented CEV President André Meyer.

“I would like to congratulate your teams for having reached the second stage of the competition” he added while addressing the representatives of some clubs that had traveled to Luxembourg for the Drawing of Lots that was slated for this afternoon.

“We had many close matches and this confirms the high quality of this competition. Nevertheless, I would like to stress that we still want to invest so that we can increase the quality of the CEV Volleyball Champions League which has turned into a real masterpiece all other Continental Confederations are looking at”.

The DOL was carried out under the supervision of Mrs. Riet Ooms, President of the European Cups Commission (ECC), starting with the women’s division, where the format was adjusted after the organizer of the final four was announced already before the Drawing of Lots for the League Round.

Therefore, upon completion of the first phase, the competition continues with the 1/8 finals and 1/4 finals.

Mrs. Ooms proceeded with the DOL whose basic criteria where the necessity to have a maximum of two teams from the same country eventually qualified for the final four and to avoid that teams stemming from the same prelim Pool cross their ways again already in the next round.

The Draw for the 1/8 finals starting in two weeks (home and away matches will be played, with the team mentioned first in the pairs listed herewith playing the first match at home) reads as follows:

The formula of the men’s competition is more “ordinary” as the organizer of the final four was announced only after completion of the League Round and therefore the Champions League proceeds with the Playoffs 12 and the Playoffs 6 as usual.

The draw for the Playoffs 12 (home and away matches will be played, with the team mentioned first in the pairs listed herewith playing the first match at home) reads as follows:

The Playoffs 6 will determine the three teams that will join PGE Skra for the final four coming up next March 17-18, 2012.

Italy: Lorizio – We showed how strong is our team