The “Palasport Fontescodella” will be the place where Lube Banca Marche MACERATA play host to their compatriots of Bre Banca Lannutti CUNEO for the first round of action in the Playoffs 6 of the 2013 CEV Volleyball Champions League. Alberto Giuliani commented the game. 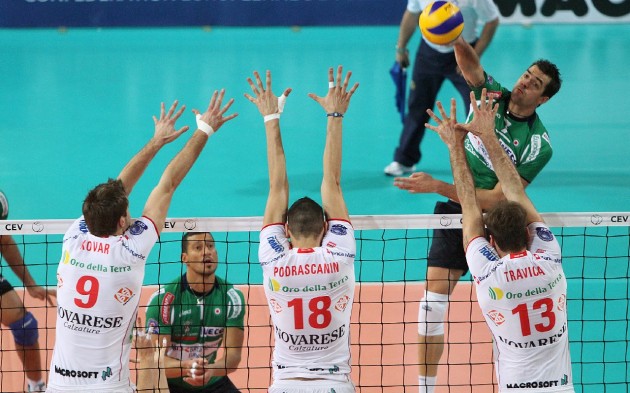 There is a long-lasting rivalry these teams are known for as they have been regularly crossing their ways in domestic competitions, but also in Europe; last year MACERATA and CUNEO was one of the most captivating fixtures in the Playoffs 12 with the side mentored by Alberto Giuliani that did eventually make it to the next round via the so-called “golden set”.

This is the fourth time that MACERATA plays another Italian club in Europe’s most elitist club competition after losing last year to TRENTINO Diatec in the Playoffs 6. “We really want to make it to the final four, a goal that our club hasn’t achieved since 2009. CUNEO is certainly one of the strongest teams out there at the moment, but I feel confident as far as our chances to progress are concerned. I even do not want to consider the possibility of a golden set; our goal is to score two wins and make it to the final four this way” says Giuliani.

Lube Banca Marche MACERATA is currently on the top of the charts in the national league while CUNEO is ranked fourth. As they edged their opponents from PERUGIA in straight sets this past Sunday, the guys of Lube Banca Marche could welcome back Olympic bronze medalist and the captain of Italy’s national team Cristian Savani who was out for three months due to injury.