Copra Elior PIACENZA emulated on Wednesday the ladies of Rebecchi Nordmeccanica to qualify for the semis of the 2013 CEV Volleyball Challenge Cup – Men after downing for the second time in about one week Stroitel MINSK of Belarus in straight sets. Read the latest news from volleyball world on worldofvolley.com. 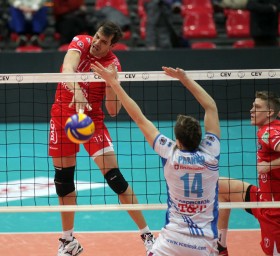 The home guys captained by Hristo Zlatanov could assert their supremacy especially in the second and third set standing out in blocking and serving (they registered 6 blocks and 7 aces in the end). Their start had been a little shaky but still they could regroup and stand the pressure put by their opponents in the key moments of the game. PIACENZA finished the game with 59% of efficiency in offense (vs. 42% for Stroitel) and did make the difference also in reception (61% vs. 43% for the guests from the Republic of Belarus). Two legendary players included in the roster of Copra Elior – Alessandro Fei and Hristo Zlatanov – paced the home side tonight with 17 and 14 points, but Robertlandy Simon and Maxwell Holt did also a very good job especially in blocking. Libero Davide Marra could support the backline while the second-lines Luca Vettori and Gabriele Maruotti also contributed to this home victory though they played only for some sections of the game.

“These matches may look easy but finally they turn into an uphill climb” says home mentor Luca Monti. “Everything went just fine as long as we could play well in blocking and serving, but this was not really the case in the first set. I have decided to use also one of our youngsters, Luca Vettori, as he has tremendously progressed since the start of the season and it would be foolish to let him wait there on the bench. I would also like to praise the performance delivered by Fei and our setter Luciano De Cecco”.