Unendo Yamamay BUSTO ARSIZIO could make it to the final four of the CEV Volleyball Champions League right via their first attempt. They first lost the return match scheduled for the Playoffs 6 to the hosts of Azerrail BAKU. In the semis they will be playing Rabita BAKU, and Dinamo KAZAN of Russia. 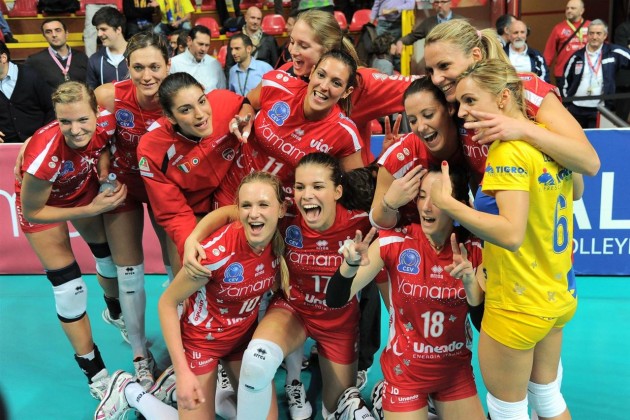 The winners of last year’s CEV Volleyball Cup and reigning Italian champions caught a good start in the opening set before Manon Flier opened the gap for the hosts with a series of aces (8:7 to 11:7). However, Yamamay fought back to draw level at 11 before Azerrail got a margin of three by the second technical time-out. Unendo Yamamay was able to claw back once more (22 all) but the hosts did not lose composure and Flier cashed the last point of the set (25-23).

Azerrail claimed an early lead in the second set (8:6) and could keep it firmly also by the second mandatory stop (16:13), cruising quite comfortably to the final 25-18 and provisional 2:0.

Things did not change in set 3 where Azerrail set the tempo of the game before Unendo Yamamay could flip the charts around (14:16). That did not last as Flier was once again outstanding from the serving line and she could anchor her side to the 3:0 that called for the golden set (25-21).

There the Italians could show their best quality and dictated the pace of the game all the way through never looking back and ultimately pocketing their ticket to the final four.

This is the second consecutive season Azerrail is shut out in the Playoffs 6 – last year it was Dinamo KAZAN that ruined their dreams of European glory – with the club having featured only once in the final four, namely back in 2004 as they settled for fourth place.