Bre Banca Lannutti CUNEO could fight their way back after a straight-set defeat last week to first claim the return match with their compatriots of Lube Banca Marche MACERATA 3:2, and then seize also the golden set (15-7) to qualify for the final four in Omsk and play there Poland’s Zaksa KEDZIERZYN-KOZLE in the semis. 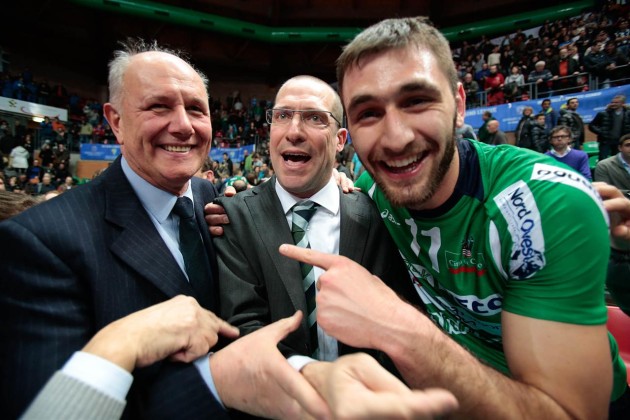 The hosts of Bre Banca Lannutti started out with the right pace (6:3 and 12:8) and as MACERATA could not find their rhythm, CUNEO headed into the final rush with a comfortable lead (19:13). Though the head coach of Lube Banca Marche, Alberto Giuliani, asked for a time-out, he could not stop the march of CUNEO that pocketed the opening set (25-17) after 24 minutes with two aces by Ngapeth.

The teams opted for the same starting six in the second set with CUNEO breaking away (8:6) at the first technical time-out and gradually widening the gap (11:7) via the contribution of Kohut and Grbic. However, MACERATA could draw level at 15 all but Antonov restored the supremacy of the home side with an ace (18:15). Grbic then aced for the 23:19 and CUNEO closed the second set with a great block stamped by Ngapeth on Kooy (25-19).

MACERATA was not ready to surrender and regrouped in set 3 storming out to 0:3 and 4:7 and did not lose control of the operations also halfway through that section of the match (8:13). After leading by five points at the second technical time-out, the guests could resist to a late comeback by CUNEO (-2, 21:23) finishing it off at 22-25.

The start of the fourth set was very close (8:8) but MACERATA could move to the front (11:16) by the second mandatory stop. Wijsmans, Ngapeth and Antonov helped cut that gap (19:20) but a time-out asked by MACERATA mentor Alberto Giuliani contributed additional energy for the guests who could call for the tie-break after the set was sealed by a serving error by Sokolov (21-25).

CUNEO got off to a flying start there (3:1 and 6:2) and the fate of the tie-break looked determined as Ngapeth stamped a single block on Sasa Starovic (9:3). Wijsmans stretched the lead to 11:4 and a time-out by Giuliani this time did not help, with CUNEO calling for the golden set (15-8).

That was a carbon copy of the tie-break with CUNEO rushing to an early lead (4:3 and 9:5) before Sokolov cashed four opportunities to make it to Omsk and the first was silvered by Ngapeth (15-7).

“I am very happy for the club and for my guys because they played with glowing hearts tonight. I think this game was a perfect advertising for Volleyball” CUNEO coach Roberto Piazza said.

“We had to be more aggressive in the first and second sets, we showed a good reaction to make it to the tie-break but CUNEO served really well in the golden set and they deserved this win” Alberto Giuliani, head coach of Lube Banca Marche, concluded.